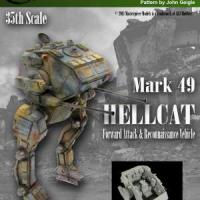 Masterpiece Models manufactures and sells resin assembly kits at their Vancouver, Washington fabrication and casting shop. Their kits include Dinosaurs, WWII, Vietnam, Scifi, and aircraft bases. Each kit is cast to order.

Background on the Hellcat

From Masterpiece Models website: The Mark 49 Hellcat Armored Walker was developed after the 3rd World War in 2046 as a forward attack and reconnaissance Vehicle. The need for walkers after the War was due to the amount of rubble strewn thru the landscape, tracked vehicles tended to bog down in the rubble making maintenance and mobility an issue. The first Walkers developed in 2099 were quite ungainly and had limited range and power. Later on in 2112 after advanced fusion drives were developed and fitted to the walkers did they become a more practical weapons system with more power and almost unlimited range.

In 2115 war again broke out over natural resources. The latest in the series of MK walkers is the MK49 Hellcat manufactured by Yutani/Grumman Corporation. The Hellcat is currently deployed in several hot spots all over the world.

The kit has 48 parts cast in a white resin. Some of the parts like the body/interior tub are quite large, and there are only a few small parts. There are some rough edges on some of the moldings such as the upper edges of the body, and all of the parts have mold flash and or casting blocks that needs to be removed. There is quite a bit of cleanup and shaping the pieces to get them to fit correctly. Other than the imperfections, the parts are crisply molded and have very sharp detail. The interior instrument panels have nice detail on the gauges and switches, and many of the parts have very fine piping or wiring cast as part of the molding. Flooring inside the turret has a nice checkered plate texture, although there are some bubbles in the molding. The main turret assembly has a nice cast metal texture to it. There is lots of detail on the exterior with panels, bolts, louvers, and other miscellaneous equipment.

The instructions for this review sample are seven pages stapled in the upper left corner. The instructions include the background (future?) of the Hellcat and some technical details. Photos of the parts are included to identify the pieces and verify the part count. The assembly instructions are on three of the pages using photographs of the subassemblies with numbers on the installed parts. There are no decals or painting instructions included with the kit, although these science fiction kits are always open to the discretion of the modeler.

The second page of instructions shows assembly of the side cannons and interior detail on the turret. Part numbers are called out in a photograph of the interior. There are extra interior parts provided with the kit, and the instructions say that the interior fixtures may be placed in varying locations at the modelers choosing. There are no locating pins or tabs so alignment of the pieces is left up to the modeler. The interior is nicely detailed, but I added more piping with solder. A joystick is shown installed on the drivers left but is not numbered.

Alignment of the breach sections of the large side cannons is unclear from the instructions. I squared them with the bottom of the turret and aligned the front angled section with the side plates on the turret. The large drum sections (#35) for the small guns were then pushed up tight to the side plate and the projection out on the top of the turret. The two parts #35 for the small guns are identical so the left and right will be upside down to each other. The actual guns (#32) are also identical and will be upside down on one side. The muzzles of the main canons are nicely molded extremely thin, and unfortunately, I damaged them while cleaning-up the parts.

Each of the legs is built up three segments plus a foot section. There are two options for the feet, a three-toed piece, presumably for rough terrain, and another flat toe piece for smoother terrain. The upper leg has a pin connection to the lower body section so the leg can rotate. The other leg joints have slip joints that need to be fixed in position. I wanted to try different poses of the legs so I drilled out the leg hinges and installed sprue sections allowing the legs to rotate.

It took some fidgeting to get the legs fixed in place so the machine would stand up, although shakily. I drilled 1/8” sprue dowels through the feet and into a base for the model to give it some rigidity. This is a big machine, standing 24 feet tall, or about 8-1/4” at 1/35.

This is a nicely detailed kit that builds a machine that can be used in either the World War “Next” or Maschinen Kruger genres. The kit has more exterior detail than a lot of other MaK kits, and the interior has lots of details. It builds an imposing machine, even at 1/35th scale. The model does require clean-up of the parts, and needs some fitting and careful placement of parts, similar to other limited run kits. I enjoyed building the Hellcat, and the flexibility in the parts to allow some freedom in assembly. Due the clean-up and careful fitting of parts, I recommend this kit only for those modelers with lots of resin experience and wanting to have more of a craftsman-type build.