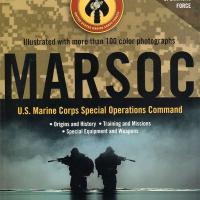 Fred Pushies has written a book on MARSOC (Marine Special Operations Command), which was formed in 2006 when the United States committed to build up the special forces after 911. It was made from Marine Force Recon companies and designed to take the war to al-Qaeda and the Taliban to stop terrorism.

The book is divided into 8 chapters:

This book delves into Marine Corps special forces from their history to the formation of MARSOC. It is packed with plenty of glossy color photos that show a lot of action. To the history buff, there’s not much depth, as most of the MARSOC missions are still closely kept secrets, unlike SEAL Team 6. On the other hand, this book is useful for the modeler. The book is a great find because the photos show operational detail that can be used when setting up dioramas or figure poses. I especially liked the photos of the vehicles.

Thanks to Zenith Press and IPMS USA for the letting me review this great book. I highly recommend it.