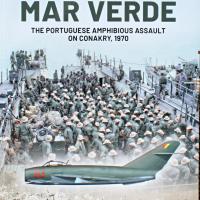 Guinea is the setting of this Africa@War Series book, describing the little-known commando assault by Portuguese and Guinean ex-pats to overthrow the current government and rescue Portuguese prisoners to thwart the Guinea guerilla tactics trying to overthrow and absorb neighboring Portuguese Guinea (now Guinea-Bissau).

The author, Jose Augusto Matos, is an independent researcher on Portuguese military history, especially the colonial wars in Africa. He has written two books in Portuguese about colonial affairs in Africa, one of them being about the subject of this Helion book. He has written five books for Helion’s @War Series and many contributions to European military magazines. Thus, this book gives a perspective from trying to make sense out of the colonial Portuguese side.

This book is No. 55 of the Africa@War series, and covers the actions of a single military incident in 1970. Dimensions are 11 ¾ X 8 ¼ inch (297 X 210 mm) and four mm thick. The book has Front and Back covers in color, and pages of color plates and maps. Overall, there are 65 B&W photos, eight color plates, five maps and two charts. The military hardware illustrated is small warships, jet aircraft and soldiers.

West Africa has seen many changes in country names, country borders, regimes, and religious sects that has been going on for centuries. The legacy of European colonial interest (takeovers) of much of Africa has left each present-day country as a reflection of many opposing indigenous and colonial peoples, politics, and militaries, making for a confused history of any region. This includes Guinea, called the Switzerland of Africa because of its scenic mountains. The Introduction tries to explain why the subject of this book came to be, and without understanding colonial history, then-current events seem strange to our present-day mindsets.

The problem with this incident is a lack of references, as documented in the Introduction as a hush-up by Portugal, Cold War propaganda from the Eastern Bloc, and only a few tell-all memoirs from participants with low to no circulation or attention and falsified/destroyed Guinean records by subsequent regimes. In other words, the author had to piece together a coherent narrative based on scarce and unreliable sources – he did a superb job.

In 1970 I was starting high school, but never heard about what was going on in West Africa – I had to look up the history of the region to make sense of how the Assault on Conakry happened. It was a time of changing of the guard in who ruled many countries, worldwide. France gave up French Guinea in 1958, brokering the present boundaries with the British (Sierra Leone), Portuguese (Portuguese Guinea), United States-backed Liberia, Mali, Senegal and Cote D’Ivory (Ivory Coast). Guinea, given a choice by the French for more autonomy in a new French colonial set-up, or independence, overwhelmingly chose independence. Emvarassed, de Gaulle warned Eisenhower that if the US recognized Guinea he would pull out of NATO, so the US was hands-off with Guinea, and the Soviets quickly moved in to get a foothold in Africa by propping up new dictator Sekou Toure’s socialist regime. Sekou Toure had led the group of guerillas trying to wrest Guinea from French colonial rule, and wanted to continue the revolution to surrounding countries (Guinea bordered six other countries), especially the countries that were not independent. Both Guinea countries were among the poorest in the world, and in 1970 poorly populated, with a history of being slave portals, further fueling anti-colonial furor in the region. Guinea had a weak economy and a paranoid strongman in charge of the country, rife with arrests, executions, unopposed elections, suppression of dissent and social instability. Toure received military aid and support from the Soviet bloc, including Cuban troops, and he quickly formed the PAIGC, a Soviet-armed, paramilitary group that waged guerilla and open war on Guinea-Bissau (formerly named Portuguese Guinea), killing hundreds of Portuguese and Guinea Bissauns in hit-and-run incursions from Guinea.

Portugal was embroiled in three simultaneous colonial wars with Guinea-Bissau, Angola and Mozambique, with limited military resources and limited national budgets. Trying to hold on to their colonial assets they tried to rectify the situation in Portuguese Guinea since it was closer to Portugal and linked closely to the Cape Verde Islands, which was crucial for NATO defense. But Portugal itself was in economic torpor and tried to take care of its own military responsibilities – thus, no help from NATO or NATO countries. Its limited resources spurred innovative solutions to the Guinea issue – the subject of this book.

General Spinola was the leader of Portuguese Guinea, and tasked with ending the insurgent guerilla (the PAIGC) attacks controlled by Guinea despite inferior military options. When he tried to secretly turn the guerilla leaders to take over Guinea, the plan backfired when the go-between, high-ranking Portuguese officers were murdered during the secret pact signing. He thus resorted to a bold, daring military option to incite a revolt in Guinea using the FLNG (the Guinean guerillas trying to oust Sekou Toure) in an effort to once and for all, protect Portuguese Guinea, enabling Portugal to divert precious resources to Angola and Mozambique guerilla wars.

After an enterprising young Portugese officer, Alpoim Cavaõ, proposed a raid on Guinea to return the Portuguese prisoners in the capital city of Conakry, and also disable the Guinean Navy, which consisted of Russian corvettes faster than any Portugese vessels to make good their escape. The airport was also a prime target in order to neutralize Russian MiG-17s, which could decimate the invasion force with unopposed cannon strafing attacks. Spinola decided to use this option as a way to unify the internal Guinean groups trying to overthrow Tourme and also overthrow Tourme and set up a friendly government that would disband the PAIGC and maintain Portuguese Guinea’s safety. It was known that many Guineans were not supportive of Toure and it was hoped they would join in removing him from power, or not interfere with the coup. This chapter describes the behind-the-scenes manipulations to make this Hail Mary attempt a reality.

Chapter 3 – The Invasion of Conakry

300 Guinean exiles and other black exiles were recruited and outfitted with Soviet-made weapons in hush-hush deals with serial numbers removed. They were given Guinean uniforms and hastily trained. White Portuguese in the operation painted their faces black. A refugee from Guinea pointed out where targets were on a map, and a plan was enacted to simultaneously attack key points to rescue the prisoners, capture Toure and PAIGC leaders, set up a new government, take over the radio and TV stations and nullify the Guinean military in a surprise naval attack with landings.

Six Portuguese Navy ships – four large surveillance vessels and two large landing crafts – arrived unseen and launched rubber bats with landing parties in the early morning hours. They achieved complete surprise and easily rescued the prisoners (including political prisoners) and disabled the Guinean Navy, and cut power to the city. But everything else went awry. They never found the radio station, Toure was not in his palace, and the PAIGC leader was out of town. The airport had no MiGs – they were in a northern city. When Toure had the radio station alert the populace, the invasion group returned to their boats and fled, fearing MiG attacks on the trip back. It did not help that some of the Guinean commandos defected, instead of rounding up political officers.

Only three invaders died, but 250-300 Guinean and PAIGC personnel were killed. As for the MiGs, none were operational, but one was readied for a sortie late in the  morning daylight and looking for the invasion force, shot up a Cuban freighter instead. This plane overflew the retreating invasion force at high altitude but did not attack. Although the raid was a tactical success, poor intelligence meant the main strategic objectives failed.

Chapter 4 – The impossibility of a Military Solution

The aftermath of the raid makes for intriguing reading, and is quite complicated, but involves the UN, the Vatican, Soviet bloc countries and continued successful efforts by the PAIGC to ravage Portuguese Guinea with more sophisticated Cuban and Soviet military aid. Toure used the raid as an excuse to solifidy his position by arresting and executing anyone he did not like, even including the Bishop of Conakry, whose life was spared after intervention from the Pope.

Portugal took it on the chin from the international community – their denial of obvious involvement made the situation worse and actually accelerated the demise of colonialism on the African continent.

Guinea-Bissau gained its independence in September 1973 and Sekou Toure maintained his oppressive dictatorship until 1984, although he switched allegiance to Western nations in order to fund exploiting mineral mining, being as poster child for the failure of Marxism during the Reagan administration. He eventually died of a heart attack in the USA undergoing treatment. Immediately, the Guinean military staged a coup and took control of the country

This book is a look back at the microcosm of African nationalism in a tumultuous period. It would have benefited from an introduction of Guinean history, and a follow-up on the aftermath to tie up the loose ends brought about by the military operation. But the behind-the-scenes manipulations, lies, cover-ups, etc. were expertly expressed by the author and is quite detailed and mesmerizing. This book illustartes a lesson for how not to conduct secret military operations. Recommended for learning how political issues control military outcomes, and for an intriguing but sad story.