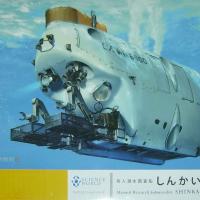 When I was a kid, I was always fascinated by Jacques-Yves Cousteau and his underwater exploration, so when this kit came up for review, I was interested in learning more about it and building this kit.

The submersible is named "Shinkai” and can dive to a depth of 6500 meters (ed note: 21,320’); as of 2011, it is the deepest-diving vessel of its type, having been completed in 1989 and starting operation in 1990. It is currently operated by JAMSTEC (Japanese Agency for Marine Earth Science and Technology) which was founded on April 1, 2004, as a semi-government research organization. Shinkai has a crew of two, plus one scientist, for a 3-person total complement. That sounds good until you find out they fit into a 2-meter diameter, 73.5mm-thick sphere made of titanium alloy.

The Hasegawa model is small, a mere 5 3/8 inches in length. The basic hull is comprised of 6 pieces, which at first glance look complicated, but fit well. Inside are a large number of tabs and bulkheads. Some pre-painting is required on the vertical and horizontal thrusters in steps 1 and 6, as they are inside a tube and would be impossible to paint after installed. I did, however, leave the props off, parts F-11, until final assembly; I also pre-painted the details of the hatch before gluing up the Observation Sonar.

I assembled everything else per the kit instructions except for the clear viewports, parts J-1, since they’re back painted and can be installed last. If I built another kit, I would leave off part C-1 until after the decals were applied, since it got in the way of decaling. The only seam I filled was on the fin, and I also sanded off a raised circle on each side of the fin where the decals fit.

I painted the model overall flat white followed by gloss white and still had trouble getting the white to cover – the yellow was no easier. By the time I had it satisfactorily covered, the paint wouldn't dry and I ended up putting a fingerprint in it a week later. After more drying, I applied the decals, which were very brittle – they cracked trying to move them – and the rear deck decal didn't fit well. Its master was probably drawn flat and, since the deck is contoured, the decal was short.

After touching up the decals with paint, I gloss coated the model with Gunze clear. I detail-painted the arms and small bits, and lastly installed the clear parts. Care must be taken when handling it, since it’s an odd shape – I dropped it three times while building it. Luckily, there's not much to break.

I sealed the hole for the stand on the inside so the stand will still snap in, but added lead weights inside the sub so it’ll actually float. This is a habit I’ve had since I was a kid, and I was successful again.

I had a good time building this unique subject. I want to thank IPMS/USA, Hasegawa, and Hobbico for the opportunity to review this model.

Submersible at sea
Previous Next