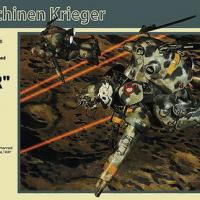 The Maschinen Krieger universe is a science fiction universe created by Japanese artist and sculptor Kow Yokoyama in the 1980s. To develop the storyline, Kow Yokoyama collaborated with Hiroshi Ichimura as story editor and Kunitaka Imai as graphic designer. The three creators drew visual inspiration from their combined interest in World War I and World War II armor and aircraft, the American space program, and films such as Star Wars, Blade Runner and The Road Warrior. Inspired by the ILM model builders who worked on Star Wars, Yokoyama built the original models with parts from numerous kits, including armor, aircraft, and automobiles. He mostly concentrated on powered armor suits, but later included bipedal walking tanks and aircraft with anti-gravity systems. The Altair reviewed here is, according the box, a derivation type of the successful generation of the unmanned Großer Hund which was developed for being sent into space battles by adding a Pit Bull space pack to the original.

First, a note about the kit. There are quite a few parts and all the joints are articulated, so I do not recommend this for children. Teens should be fine. The kit itself contains 218 parts, including 16 sprues of excellent ivory plastic, one clear sprue, two lengths and diameters of vinyl tubing, one vinyl sprue of hoses, and a large sprue of different poly caps. The kit is in two primary colors – the mechanical areas are dark gray, while the armor and major parts are a base of barley gray with dark sea gray splotches. There are several banding colors, but more on that later. I wanted to keep the dark gray and camouflaged gray parts separate for ease of painting. Since the kit’s parts are joined by poly caps, this is easy, so I broke the build down into shoulders and elbows being dark gray, them built them separately. The two arms, head, main body, waist, and legs were all kept separate to ease the painting.

The legs are assembled with the feet finished first, then the lower leg, knee, and upper leg. Be careful here, as they are left- and right-handed, and several holes have to be drilled. I managed to confuse myself and have to determine the correct legs based on the armor. I ended up puttying and changing parts, and did get it fixed. One other thing to note: there are seven poly caps in each leg so they can fully articulate. Fit is good, but the poly caps make it tight. I clamped every piece tightly and was left with only a couple seams to fill. The lower body was next, and was a snap. I glued the three armor pieces to the front. In hindsight, I could have left them off, as the fit was very good and it would have made painting easier.

The body assembly was next. It is made of an inner body covered by the rocket pack. This required filler in the seams around the bottom and in a few small places on the top, but nothing major. There are two "headlights" and these were left off. There were no issues with the head, but I did leave off the "eyes". One thing to note here is that the kit requires you to add rivets/bolt heads from sprue V. These have the rivets/bolts attached in two manners: first is attached to a sprue in the normal fashion where you could clip them off and add them; second, and the easier way, is flush to the plastic. To install these parts, take a sharp blade and slide it under the part, then add a drop of liquid glue to the indicated spot and add the rivet. Works like a charm and adds a lot to the kit.

The two forearms are different and built up easily. I left the hand off of the one arm as it is the same color as the shoulders and upper arm. The shoulders were next; I followed the instructions and they assembled easily. I left off the shoulder and elbow armor – it fit so well that it could be added later and was attached with poly caps in most cases.

Painting was done using Xtracolor RLM 66 gray for the shoulder and darker parts. The barley gray was tough. I eventually located info that this color was changed to camouflage gray and I actually had a bottle of Pactra acrylic which was ancient but worked perfectly. I base-coated the remainder of the kit with this. At this point, you need to choose one of the five color schemes. I chose the "Kampfgruppe Totenkopf" scheme, which has flying skull logos on the head and yellow marking bands. I added the splotches with Gunze Dark Sea Gray. I masked of the bands on the arms, body, and armor and shot them with RLM Yellow.

After all was dry, I glosscoated the kit with GlossCote and prepared for decals – and there are a lot of stencils on the kit. The decals worked great on flat surfaces, but they are thick took some work to get them around curves. I recommend using Solvaset and/or Mr. Mark Softer. Get them very wet and don't touch them. They will settle down with some work. Once dry, I added some oil wash to dirty the kit up, and then flatcoated. Some pastels and chipping and another flat coat, and the clear parts were added. The kit calls for the "eyes" to be clear but I wanted some color, so I shot them clear orange. These were added and the Altair was ready to defend the universe.

I love these Ma.K kits, and this one is not an exception. They are a blast to build and paint, with enough detail for the older modeler and, because they’re SciFi, you could make them into anything or stick with the Ma.K universe. Highly recommended.

My thanks to Carol Pesch and Hobbico for the opportunity to review this kit, and to IPMS/USA for the chance to build it.