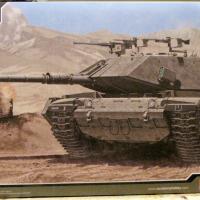 Academy continues its tradition of rendering armored fighting vehicles of the Israeli Defense Force. They have kitted several variants of the Merkava and are now doing a second variant of the Magach series (The first being Magach 6B Gal Batash, kit #13281). The Israelis are well known for renovating and modernizing older vehicles, the Magach being a prime example of this tradition. Using older M-60 Patton hulls and turrets, the Israelis upgraded the engine, armor system, and fire control system, the vehicles remained competitive into the 1990s, but have gradually been withdrawn from active service. Some quick research on the web seems to indicate that they have been withdrawn from service, but I am uncertain if they are used by reserve formations or Israeli para-military units.

The base kit is an older Academy M-60 with new sprues for the turret and deck. The differences in detail and molding technology between the old sprues and the new are remarkable. The hull has the motorization holes and gaps that are typical of some Academy kits. The older sprues have some flash, but are still pretty good shape. The kit has a total of ten sprues in light brown plastic and vinyl tracks that have to be assembled the old fashion way, a hot, flat screw driver (I chose to use a stapler). The kit includes markings for five vehicles. The instructions have drawings and several black and white photographs to insure the proper place of the new pieces on the hull, which is a welcome addition. Paint call outs are included with six manufacturers. The Tamiya color line is not included.

As with most kits, the Magach begins with the hull and running gear. As Mentioned previously, the motorization holes are still present. The hole that is the middle of the hull has a small hatch; the oval hole does not. I chose not to putty over the holes, but did use some sheet styrene to ‘plate’ over some of the slots that can be seen from the side, mostly in the rear. Fortunately, many of these remnants of it motorization roots are hidden by the running gear and armored skirts. The age of the hull is apparent in the complete lack of detail that is found on many modern kits. Nevertheless, the running gear goes together very quickly. There were no problems encountered. The front, bottom of the hull has a new piece that represents the up-armoring of the original M-60 (part # T-16). There are no pins to attach this to the lower hull and the instructions are not precise. It is critical that the new upper armor piece (part # T-15) and lower armor piece line up with each other. It is not shown in the instructions, but pop on the upper hull, with T-15 to insure that it aligns properly with T-16. Since the top of the tracks are hidden by an armor skirt, I used a set of staples to assemble the tracks. As long as they cannot be seen, staples are much more robust than a hot screw driver.

From the lower hull, you transition to the upper hull. Since the base kit is old, assembling the additions to the older hull was not easy. There is a new sprue of parts, the ‘T’ sprue that needs to be added to the front of the hull. The drawing and the accompanying photograph is helpful in the placement of the new parts, but it is still difficult to discern the precise location of these new parts. Compare the parts with the drawings and photographs in the instructions and you should do okay. From the upper hull we transition to the turret. By far this was the easiest part of the kit to assemble. Again, while the base kit is older, the additions to the turret are very well molded and engineered. They fit over the M-60 turret with ease, though you should test fit the pieces to make certain that the fit is tight. Many of the bits and pieces that go on the turret are rather small, so care must be taken when removing them from the sprue. I lost several to the carpet monster (thankfully they were retrieved).

One of the more frustrating parts of the kit, though relatively minor, is the template for the towing cables. There is a small length of nylon cord to simulate the towing cables. I cut the cord according to the template that is in the instructions. I also enlarged the holes at the ends of the towing hooks to better accommodate the nylon cord. Well, something is amiss. After securing the ends of the nylon cord in the towing hooks, the cable was too short and could not hook up with the storage hooks on the sides of the turret. I am not sure what Academy had in mind, but I was a bit disappointed. I dug around my supplies and could not find a replacement piece of twine that is scalable to 1/35, so it is missing from the final model.

Rather than mixing my own colors, I found that Vallejo made the shade I was looking for. Their model air product line has IDF Sinai Grey, which is the shade I was looking for. It can be applied directly from the bottle and, in my mind, is spot on in terms of the color. There are not a lot of decals, but I was perplexed by the tactical marking on the turret basket. The instructions imply that you make a tarp with facial tissue with diluted white glue. I don’t see how decals can adhere to this kind of surface. Given the issues with this type of materials, I chose not to install them as directed. Instead, I treated these as placards and cut some thin sheet styrene and glued them to the storage basket. The instructions don’t really give you an idea of the color, so I painted them in Sinai Grey.

The final part of assembly was applying the decals. There is an extensive white stripe that is supposed to go down the length of the gun barrel. The decal would not react to copious amounts of softening solution and in my efforts to apply one part of the strip, it basically destroyed the decal. Even those that were to apply to a flat surface was less than I would have hoped for. Not sure if this is a manufacturing defect because I usually don’t have a problem with Academy decals. The final step was to give the surface a slight wash of burnt sienna and a dust coat of Tamiya buff.

I applaud that Academy is pursuing these older, less well-known Israeli vehicles. Given that the base kit is rather old, care must be taken when it comes to assembling certain parts of the kit, in particular the hull. By far the biggest disappointment were the decals followed by the towing cable. Regardless, if the proper care is taken, this is a nice addition to any collection of Israeli vehicles. My thanks to IPMS, MRC, and Academy Models for giving me the opportunity to review this kit.