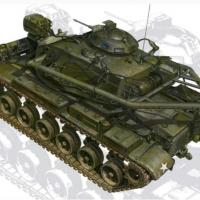 From my new, best friends at Wikipedia: The M728 is a full-tracked combat engineer vehicle designed to provide maximum ballistic protection for the crew and is a heavily armed derivative of the M60 series tank. Modified to provide a mobile and maneuverable weapon for combat support of ground troops and vehicles, the M728 vehicle is used for breaching, obstacle removal, transportation of demolition teams, and pioneering operations.

Although the M728 consists of a tank hull and a short-barreled turret, it is not a tank and should not be routinely used against enemy tanks. It is an excellent heavy assault support vehicle when used as part of a combined engineer-infantry team. It is usually equipped with either a hydraulically operated M9 Dozer Blade Assembly or a D7 Mine Plough. The M9 Dozer Blade Assembly is used for clearing the way, filling depressions, leveling ground, and for other purposes. The D7 Mine Plough is a V-shaped plough that performs counter-mine activities by lifting buried mines and pushing them to the side as the vehicle moves forward. A winch and retractable A-frame crane are mounted on the turret for lifting, carrying, and winching operations.

The hull front contains the driver's compartment, controls and instruments. The hull rear contains the engine, transmission, fuel tanks, and related automotive parts. The turret has positions for the commander, gunner, and loader. The vehicle is also equipped with a NBC protection system for the crew. It can produce a limited smokescreen by dumping raw diesel fuel into the exhaust system to visually obscure the area around the vehicle as well as provide a limited vehicle recovery capability.

The vehicle is armed with a 165mm M135 short-barreled demolition gun. Depending on the usage, the gun can be depressed and elevated against targets up to an effective range of 925 meters (1,012 yd). The gun's primary purpose is for clearing defensive fixtures and obstacles, such as walls, fences, roadblocks, and bunkers, or for destroying buildings and is generally not meant to be for use in anti-personnelor anti-tank warfare. The effects caused by the HEP round's base detonating fuse and large amount of explosive can demolish barriers and knock down walls. One round creates a 1-foot (0.3 m) diameter hole in a 7-inch (178 mm) thick reinforced concrete wall. The round's effects against bunkers and field fortifications are dramatic, often crushing or smashing entire walls. The gun fires two types of fixed ammunition, the M123E1 HEP Round and the M623 Target Practice Round. The main gun has a co-axially mounted 7.62mm NATO M240E1 machine gunwith 2,000 rounds of ammunition. In addition, a .50 caliber M85 machine gun is mounted in the commander's cupola; this has 600 rounds of ammunition.

Provided for your amusement: a short (2:54) YouTube video of the M728 in action. https://www.youtube.com/watch?v=8KvikyTbi4M

Upon opening the box you are immediately confronted by almost eleventy-billion parts. Maybe not quite that many but a lot. What is included are two upper turret parts with separate casting numbers, two complete sets of road wheels, a small sprue of stowage bits and applicant armor. Some of these extra parts are for another mark of the M60 family. Just follow the well drawn assembly instructions and you shouldn't have any problems deciding which ones to use and which ones get thrown into the spares box.

Both the hull and turret of AFV Club's M728 have a beautifully cast texture. The covered mantels for the main gun and commander's cupola machine gun are provided in a soft vinyl material. Nice touch! You do have the option of a plastic gun mantel for the main gun. Speaking of the commander's cupola, the upper portion (with the vision blocks) is molded in clear plastic with appropriate texture.

Other parts included are a metal barrel for the main gun, chain, vinyl tubing, thread for the winch and tow cables, two small frets of photoetch for the turret basket and various interior/exterior parts, and a diminutive decal sheet with the three marking options. All of which are in overall Olive Drab. It should be noted that the M728 entered service in 1965 and was retired in 2000. Other marking/color schemes (Vietnam, Gulf War, NATO) are available through your own auspices.

Tracks are provided in the familiar rubber-band style but are just lovely.

Assembly of AFV Club's M728 begins with...wait for it...the hull. Almost every hull bit is provided as a separate part so this portion of the building process may take a while. But you will be rewarded with some very cool detail that might otherwise go missing. As an example; the swing-arm/torsion bar mounting brackets on the lower hull comprise two parts.

AFV Club provides two complete sets of road wheels. There was some flash around the rims on a few of these parts but nothing too taxing to remove. Don't get carried away sanding smooth the surfaces of the individual road wheels. The 'mold line' around the circumference of each wheel is a feature of the prototype as are the different patterns.

The assembly instructions use the road wheels from one set of sprues and the drive sprockets from another. With the different tread patterns on the road wheels and bolt head configurations on the return rollers that AFV Club provides, you could mix and match just to see if anyone is paying attention. Although I suspect the additional road wheels are specific to an M60A1. There is a small 'O' ring (in lieu of a poly-cap) that gets sandwiched between each road wheel that allows each to turn freely. You can probably roll this model across the floor. Don't scoff! You know you're gonna try...just don't forget to make engine noises when you do!

Interior parts are provided throughout with some nice detail on the inside of the driver's escape hatch as well the necessary driver compartment components (seat, gear shifter, control panels, vision blocks, handle bar steering yoke, etc.). AFV Club provides loads of interior detail end-to-end with this kit. All the engine compartment cooling louvers are individual parts, which should make showing off an aftermarket engine that much easier. Assembly continues with the mounting brackets for the dozer blade and the blade itself. Once more, oodles of detail from the all but flash-free parts.

Next is the main turret and all the associated fiddly bits common to the M728. AFV Club has provided main gun breech details as well as bits for the tank commander's sighting scope plus additional interior detail (periscopes ,etc.) found in the cupola of the real thing. Very cool!

The last assembly sequence involves the A-Frame Crane Boom and winch. With separate bits for couplers, pulleys, snatch blocks, and attachments points, AFV Club hasn't scrimped on molded detail here either. Once assembled all that is left is to decide what shade of Olive Drab you wish to use and paint away. It is worth noting that the decals are appropriately thin and go down without any fuss. And as is customary with AFV Club kits, you get an 8 x11 glossy Hollywood-type print of the box art that is suitable for framing.

There are a few fit issues with some parts (upper/lower turret halves, upper/lower hull bits) but nothing insurmountable. The pesky seam between the upper and lower hull pieces is engineered in such a way that it disappears after you attached the side fenders.

This M728 Combat Engineer Vehicle from AFV Club is a beautiful kit with loads of unexpected detail. If you want an M728 in your collection, then building one won't get any easier than with this kit. The level of molded detail that AFV Club's M728 kit provides straight out of the box is enough to satisfy even the most demanding.

My sincerely thanks to AFV Club and IPMS/USA for the review copy.

Grab handles on the engine louvers are individual parts

Thin bracing for the side skirts