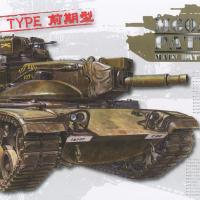 Without giving a lengthy history of the M60 Patton the following is a short summary of the M60A2. The M60A2 nicknamed the “Starship” grew out of the development of the M60A1 with a CVWS (Combat Vehicle Weapons System) turret firing a 152mm conventional round. Planning began in the late 1950s. These were initially named the M60A1E2 then later standardized to the designation M60A2. Production was ended in 1975 with a total production run of 526 vehicles.

Upon opening any model kit, what I like to look for is the amount of work, such as mold relief tapers, flashing, ejector pin release points (recessed or elevated marks), mold shift points, sprue attachment points and mold seams that need to be addressed during construction. The parts have crisp detail with little flash located on a few small parts. A few pin release points were seen which will have to be sanded or filled.

The instruction manual is printed in color measuring approximately 8-1/4” x 11-1/4” in a portrait orientation. It contains thirty-nine steps on eighteen pages, one page of parts layout and the last page contains the paintings and markings guide for two vehicles of clear sometimes cluttered diagrams in typical AFV fashion. Page 2 contains the color list for GSI Creos, Humbrol, Revell and Lifecolor. There is plenty of room for notations prior to or during the building stage on the sheet. The paint and markings guide allow for decals of two vehicles both in olive drab. One for the “Bush Master” and “Top Gun 1979”

Even though there are quite a few aftermarket items which could be purchased and used, this kit straight out of the box looks to be a fine representation. With that said, I look forward to building this early version of the M60A2 Patton. Additionally, as modelers we do not always follow the instructions step by step, however in this review I will describe any irregularities or problems I encountered in the build step by step. Now for the fun process.

Steps 1 through 21 consist of building the lower and upper hull. Read the instructions for these steps as each step depends upon the next. Test fitting ensures correct alignment and placement as the instructions sometimes not apparent.

The decals laid down nicely after a clear gloss acrylic coat was applied and allowed to dry for 24 hours. As I usually use Microsol as my setting solution, I found no problem with the supplied decals. After the decals dried for 48 hours, I sprayed on another gloss clear acrylic coat to protect them during the weathering process.

I sprayed a primer coat on the road wheels, sprockets and rollers using Vallejo USA Olive Drab Surface Primer 73.608 followed by a coat of A. Mig Olive Drab Dark Base 925. After these dried, the rubber on the road wheels and rollers was hand painted with Vallejo Panzer Aces Dark Rubber 306. The tracks were sprayed with Ammo Mig Rubber and Tires. The metal was hand painted with Ammo Mig Steel. Pin washes were applied using various acrylics and oil paints. After a filter coat of Vallejo Desert Dust 76.522 was applied to the entire model, different lighter shades of Vallejo Olive Drab paints were applied to lighten various areas.

The tow cable was first primed with Vallejo Black Primer then a coat of Vallejo Model Color German Camo Black Brown 70.822. After this dried a thinned wash was applied using Vallejo Light Rust 505. Pigments were applied using mixes of Ammo Mig Standard Rust and Vallejo Dark Steel was finally applied wiping with a Q-Tip to burnish.

After completing each kit, I ask myself, “would I build this kit again?” In regards to this kit, my answer is “most certainly yes”. Due to the combination of different kit sprues, one is left with many parts remaining to add to an extra parts bin. AFV Club does not designate which parts are unused. Detail molded into the kit such as foundry marks and casting numbers on the hull and turret add to a feature of the model.

This was an enjoyable build. I highly recommend this kit, however, due to the complexity, it should be reserved for the intermediate to advanced builders.

Thanks to IPMS/USA and Hobby Fan/AFV Club for allowing me to review this kit.