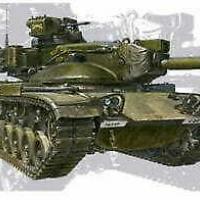 The M60A2 early type by AFV Club is another one of their M60 series of vehicles including the M60A1, M60A3, M60A2Early and later and the M728 CEV as well as several Foreign subjects based on the M60 series of tanks. The M60A2 early includes sprues from the common components of the hull and turret and running gear. M60A2 specific components are included to model the right vehicle. In this case the Gun barrel with the bore evacuator and the M60A2 turret and assemblies.

The ARCOVE report published in January 1958 recommended a major effort be directed toward the development by 1965 of a guided missile weapon system for future main battle tanks. Thus set in motion the development of the Combat Vehicle Weapons System Shillelagh (CVWS) which consisted of the 152mm XM81 gun launcher. This could fire conventional projectiles or the XM13 missile. The conventional projectiles had a completely combustible case and primer. The XM13 Shillelagh missile was ejected from the tank and a solid rocket motor propelled the missile to the target under the infrared line of sight guidance system. Development proceeded during the early 1960’s and in July 1965 the M60A1E1 was type classified and 243 M1A1E1 turrets were procured with 1966 fiscal year funds and an additional 300 tanks were purchased with FY1967 funds. These were later standardized as the 152mm gun Full Tracked Combat Tank M60A2. Army figures show 540 M60A2 tanks produced. The consumable cartridge cases did not completely burn and left hot gasses and residue inside the breech, slowing the loading of subsequent rounds. This was addressed by fitting the closed breech scavenging system (CBSS). This was a high pressure compressed air system that injected 1000PSI air into the breech right after firing to clear the residue. These subsequently modified tanks can be identified by a bulge at the rear of the hull behind the engine and a gun tube without a bore evacuator (straight tube) The M60A2 tank was fielded to Armor units in Europe in 1975. Production was halted in 1975. Due to operational issues with the Missile and the fire control system the tank was phased out of service by 1980 with the rise of the deployment of High velocity Fin stabilized Sabot rounds that could be used by the M60A1 and the M60A3 tanks.

There were approximately 15 sprues molded in clear, black and olive green plus the metal barrel, decals, vinyl components and tracks. Parts count is over 500

The instructions are a 20 page booklet with a color slick front page and the color slick 4 view schema rear page for the two decal options . There is a Sprue Tree map on page 19 and a notes and colors chart on page 2. There are 39 assembly steps. Discrepancies will be noted in the build notes. There is a separate color box art flyer.

Not much here, the two tracks are some sort of synthetic rubber but it is connected by a pin so you don’t need to glue it or staple it. The section that is pinned can be torn so be careful

I started by applying a primer consisting of Krylon Color Master with Durable ColorMax Technology rattle can (Flat Black) paint. It has great thin coverage and quick drying time. I left it to dry overnight to make sure it was fully cured.

I had to do some soul searching regarding the gloss OD finish. The M60 was developed and fielded during the Army’s transition from Solid Olive Drab finishes. My research showed a lot of dark shade OD solid green tanks. As the MERDEC schemes were standardized, they were used as were some local adaptions. Also during this time, the M60A2 series was being phased out of the inventory, its service life was relatively short. That being said, I went with an OD scheme, I wasn’t happy with the bottled Od as it appeared too green and not dark enough from what I remember of what I have seen, and what I saw in photos. So I settled on a darker shade. I mixed Mission Models MMP 026 US Army Olive Drab FS33070 and darkened it with MMP 035 NATO Black, which had a green tint. I mixed it 7 parts MMP-026 to 3 parts MMP-035 I then top coated it with MMP-008 Gloss Clear Coat

The decals were fine; they went on easy and adhered no problems. I got in trouble with one decal that was not split across the tow cable and it folded in on itself, so ruined, I left it off.

I went back by hand and painted the heater exhaust pipe on the right fender, the machine gun barrel in the cupola and the end connectors and center guides on the track.

I was restrained on the weathering as most of my experience with tanks on European roads was mostly road wash and dust, not much mud, a little European splash mud from Vallejo and some AK Rain marks For NATO tanks. I then hit it with a dusting of Vallejo Model Air 71.027 Light Brown to dust it up and cut the glossiness without covering it over.

This early version of the M60A2 is well represented by the parts mix in this kit, but the instructions will have you build the wrong version with all the parts for the Closed Breech Scavenging System (CBSS) AFV Club produces the later version of that kit that would use that component and is most likely included in that kit as well. The kit parts pretty much have great fit and there are subtle locator marks for the tow cable PE and other parts. This basic chassis is used for multiple M60 Variant kits and has made use of the basic parts with multiple sprues to cover the subtle variants. The only really challenge I had was the bustle rack parts and assembly. Because the plastic components were so delicate and had unusual molding, it was very hard for me to assemble without breaking some of them.

I would like to thank AFV Club for the kit to review and IPMS for the opportunity to review this kit. Thanks for the crew support of the reviewers.