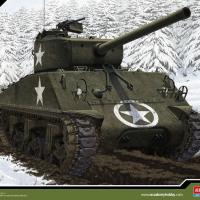 The M4A3 was the main medium tank used by the US Army in Europe starting in the Fall of 1944 until the end of the war. The A3 version had the Ford 8-cyclinder GAA 500 horse powered engine. The (76)W stands for the 76mm gun version with the T23 turret and the “Wet” ammo storage bins built into the floor surrounded by a jacket filled with an anti-freeze solution. This kit represents a M4A3 that would have fought during the Battle of the Bulge in mid to late December 1944.

This kits contains 10 dark green sprues which are a mixture of past Academy releases. There is a sprue from their M10, older M4s and a couple from M51 Super Shermans. There is a small photo etched sheet with the headlight, horn and taillight guards, plus some unused pieces. A length of white string is supplied for the tow cable. The decal sheet had six versions represented. Interesting, it has a Beute Panzer option for a captured tank in German Army use and some faded, worn national insignias. There are no clear parts. The tracks are molded in one piece. I had to warm them up to straighten them, since they were packed folded.

The build starts with the VVSS (Vertical Volute Spring Suspension). The VVSS mounts to the lower hull with just one pin which I broke on a couple, so be careful here. There are mounting circles on the hull for the E8 suspension, so these need to be removed. The instruction does not tell you this and I missed it until after painting. This model used the upper swooped returns arms, but the kit also contains the older return rolls, so be careful to use the correct parts. The lower hull is a tub type with the rear engine plate and drive sprockets mounts added. I did have a problem with the track tension/rear idler wheel mounts not matching up with the engine plate. I suggest having the transmission cover ready when gluing the front drive socket mounts to help line them up. I had to clamp them to the transmission cover to prevent a gap on both sides. The tracks are very tight and seem to be a few links too short, but look very nice with the track extenders on them.

The texture on the transmission cover and turret is a little weak. I used liquid glue and a stiff brush to add more texture and help cover the upper and lower turret seams. The headlight and horn guards are way too thick, so I used the photo etched guards. The mounting squares on the hull need to be removed if using the photo etched parts. The bow machine gun needs to be drilled out. There are no locator marks for mounting the tools, they glue right onto the upper hull. I used the Tamiya M4A3E8 I just completed to help me locate all these tools. The 76m barrel comes in three pieces. The seam runs down the sides and the barrel end counter weight is a separate piece. This part was not molded very well and is not round. An aftermarket barrel would be a good addition. The barrel was not moveable after installing it even though the instructions say it is.

I do like that Academy includes about 12 extra grab handles, unlike the Tamiya kit when still uses the solid fins for grab handles. The commander’s copula does not have separate, clear view ports, so I used a blue filter to give the illusion of glass. I am kind of disappointed this kit does not come with clear parts for this and the headlights. There are no interior details except for the commander’s hatch. The details on the turret top, like the machine gun storage brackets, are very crisp. The casting numbers are very well represented. The H sprue is some good stowage gear for the rear shelf.

By far the best part of this kit is the 50 caliber machine gun. This must be a new Academy molding and is on a separate sprue. The receiver is slide molded so the cooling jacket is hollow. The barrels included are two pieces and fit great into the cooling jacket. The feeder tray and cover are separate and highly detailed. The ammo box and it’s mount actually have the correct retainer arm on it. I hope that Academy will sell this sprue alone. I would replace all my Tamiya and Dragon 50 Cals with Academy’s set up.

The decals sheet has six options. I really like the captured German option and the faded Italian campaign decals. I stayed with the Battle of the Bulge theme. I laid down a coat of Future, but had a silvering problem with the front national recognition marking and the USA numbers on the rear sides. I tried five to six application of decal setting solution, but that did not seem to affect these decals much.

Overall this kit took me about 12 hours to build, much faster than usual for me. It went together faster than the Tamiya M4A3E8 and easier than the Dragon M4 that I have done recently. But it lacks the detail of the Dragon kit and the nice fit of the Tamiya kit. I still enjoyed building it and would recommend it.

I would like to thank MRC and IPMS for the opportunity to build and review this new addition to the M4 line of kits.

Silvered decals on front of tank

Left side view of finished model

Right side view of finished model

Top side view of finished model

Top side view of finished model
Previous Next