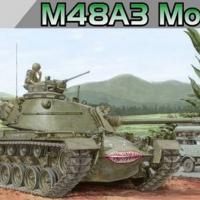 A new release in Dragon’s Black series of modern armor the M48A3 Mod.B is a welcome option over the aged Tamiya M48A3 kit from decades ago. Hopefully the drawbacks and challenges of the old Tamiya M48A3 have been corrected with this new release.

Before starting, the Dragon kit has modest cast hull texture; so if a rougher cast texture is desired, glue the hull top & bottom together first adding parts A3, A4, D1 & D3. The mounting pad for D17 & D18 bumper will need to be built up to support the extended double bumper. You may also want to assemble the F13 & F20 Turret upper & lower along with F10, F11, & E1before adding casting texture. Proceed to add cast texture before starting Step 1.

Dragon missed the 3 mud slots in the drive sprocket just like Tamiya did years ago, so these will need to be added. Dragon, also, missed the towing hooks on the front towing pintles. The remaining suspension build is pretty straightforward.

Watch for mold pin marks on D36 and fill before assembling remaining upper rear hull. Parts D4 & D2 can be a little fussy aligning into place. Missing is the cable conduit from the infantry field phone to the hull so check your references for this.

The fender assemblies are fairly straightforward except for the molded on toolbox handles which beg for replacement with aftermarket PE or resin or even the old Italeri M47 toolbox handles. Also there are lots of slots to fill on the reverse underside of fenders if you’re so inclined.

Watch for sinkholes and a cumbersome joint on the driver’s heater exhaust pipe. Also assemble first the headlight shrouds and remove the joint seam before attaching to hull. You may also want to leave off the clear headlight pieces until after hull painting.

The turret basket is delicate, fragile, easily warped and doesn’t have a real secure gluing purchase. So you want to wait to add to turret until closer to the end of the build. Part F9 needs to be blended to the hull, removing the seam, before adding F1, G24 & G10.

Dragon missed the mark by not including a turret gun manlet, TC MG cupola cover, TC cupola lift rings and the searchlight. The overwhelming majority of M48A3s had these covers in place. Several aftermarket sets have cropped up with varying degrees of success. The Legend set, which was first on the scene, has a decent enough resin replacement manlet cover for the main gun and searchlight but no TC MG cover. Also the Legend a not very user-friendly or easily executable mounting piece for the manlet cover. I dispensed with the mounting piece that was to be inset into the turret opening with no directions, no good locators or gluing shoulder. I simply sanded down the pivot bulges for the main gun on the turret and glued the resin manlet cover directly over the opening. I glued some fine string as the outline seam for the cover just inside the molded hold down perimeter and backfilled to the resin piece. Legend did provide some very nice PE hold-downs with extras just in case. Dragon did model the manlet cover lower hold down rod tabs that extends across the lower cover holding it place. This can be replicated by carefully drilling a very tiny hole and inserting wires from both sides, check your reference photos.

The TC cupola lift rings can be added at 2, 6, and 10 o’clock when viewed from above, and fabricated from wire. Again check your references.

Dragon omitted the maintenance holes on the sides of the gunner’s periscope cover so these need to opened. Take care when trying to remove G4 & G5 Loader hatch springs from the tree as my sample came with one broke & the other broke when trying to remove from the tree. Another trouble area was the instruction sheet stated length of 62mm for the tow cable; 75mm worked better as a length so the glue on cable ends locate to the proper location on the hull. Also missing are the interim bracket under the turret basket to hold the tow cables. Again please see your references for shape & placement. Part G23 the MG interrupter was sometime fitted or not, so check the tank you’re modeling.

The DS tracks worked well and appear to have the proper amount of tension but do check for some molding flash and burrs.

Here’s another area where this kit falls short, 4 schemes are shown but none are unit identified and all are noted as 1965 which is unlikely as the Mod. B modifications didn’t appear until after 1967 as counter to frequent combat damage. There are 3 Army & 1 Marine schemes called out. The most notable “Wild One 4”, which was also a Tamiya scheme, has issues. The barely readable serial number on the side view needs to be assembled from the numbers series provided unlike the other schemes, which provide just one decal for entire serial. Also the second number which should be a “B”, not an 8 as called out and the “B” is not provided anywhere on the decal sheet. The next inaccuracy for “Wild One 4” is the provided 11ACR & 919 Eng decal in hand painted type font when these should be in typical Army stencil as seen in the readable photo of “Wild One 4” in David Doyle’s M48A3 in Vietnam on page 27.

In conclusion DML solved the suspension height and motorization hole issues over the Tamiya kit but missed a some of the same details that Tamiya did years ago, not to mention no searchlight.

So it’s up to the modeler of M48A3 kits with both kits having merit and issues. Both are still going to take upgrades for a detailed, accurate Patton.

My thanks to Dragon Models USa for the review sample.