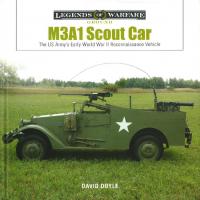 David Doyle's latest book is one of the latest entries in the 'Legends of Warfare' series with entries in Ground, Naval, and Aviation. The first Ground book focused on the Panzerkampfwagen IV, the first Naval book was on the USS Yorktown (CV-5), and the first two Aviation books were are on the Curtiss P-40 Warhawk (#4) and Douglas TBD Devastator (#3). This tome is the ninth release in the Legends of Warfare - Ground series.

After many years of being published in enthusiast publications focused on military vehicle restorations, David Doyle 'graduated' to full-fledged books in 2003. His first book was a hefty 512 page history of US military vehicles. He has now had more than 100 books published in military vehicles, aviation and naval topics. David and his wife Denise have amassed a collection of ten Vietnam era military vehicles that still displays at shows. In June 2015, was honored with the Military Vehicle Preservation Association's Bart Vanderveen Award, given in recognition of "...the individual who has contributed the most to the historic preservation of military vehicles worldwide." Be sure to check out David's website at DavidDoyleBooks.com where you can see and buy at a discounted price off of MSRP, all his books that are still available.

The origins of the M3A1 Scout Car came from the need to replace the Cavalry horse in WWI. The desire was to have a vehicle with the agility and speed of the horse, but with the addition of some armor plating and the capacity to carry heavier firepower. Several companies responded to a proposal in the 1930s with White Motor Company of Cleveland, Ohio, emerging as the winner. The Scout Car was not designed to be leading the charge into battle, but to be the eyes and ears of the Army to report to locations of enemy armed forces. Nearly 21,000 M3A1 Scout Cars were produced between 1940 and 1944. The Ford M8 Light Armored Car began replacing the M3A1 as a front line vehicle in 1943, although other countries would keep the M3A1 in service until the late 1990s.

The front cover features a color photograph of the late Ron Grasso’s restored M3A1 in profile. A late production vehicle with combat wheels, W-60166091, carries markings common to many US vehicles preparing for the Normandy invasion. The back cover is an enlarged clip of a photograph from page 96 of a M3A1 Scout Car of the 2nd Armored Division on stateside maneuvers in August 1942 fording a stream. You get 112 glossy pages graced by clear, well captioned, photographs. I counted 207 photographs; 23 in color and 184 in black and white. Many of the selected photographs are being published for the first time.

David Doyle does a great job of covering the M3A1 in-detail through photographs. Many of the photographs illustrate the vehicle in various stages of assembly (See page 029). The Field Use chapter photographs are primarily of stateside maneuvers and offer good insight to the equipment variations used. David does cover the predecessors to the M3A1 well, along with several experimental variants. One that caught my attention was the M3A1E3 that was evaluated for anti-tank capability by mounting the M3 37mm gun. Sadly, the additional weight of the gun adversely affected performance [Page 072].

My focus on the Scout Car is of course its use in the early sixties era Congo conflict. There the Swedish military operated two captured Katangese Scout Cars under UN markings (they also operated four captured M8 Greyhounds). One Scout Car was named “Olga Belle” and the other “Petronella Belle”. Sweden still has a M3A1 in “Olga Belle” markings that was on display at the Axvall Armor Museum. Unfortunately, this museum was closed down in 2007, and all vehicles were transferred to the Swedish Defense Museum Arsenalen in Strängnäs, which opened in 2011. Although the collection exceeds 350 vehicles, only some 70 are currently on exhibit. Although David does not cover the foreign use history of the M3A1, this book provides excellent detail photographs to provide the basis for an excellent model.

This is a gorgeous hardbound book and is well worth the money. David Doyle provides plenty of detailed photographs with detailed captions. I am definitely looking for more monographs in this new and affordable series of books from Schiffer.