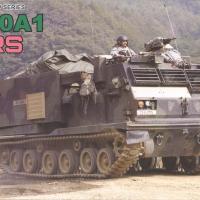 The M270 MLRS (Multiple Launch Rocket System) was first delivered to troops in 1983 and has since been delivered to many NATO countries with over 1,300 being built. The last M270 was manufactured in 2003, when a last batch was delivered to the Egyptian Army.

DML first produced a MLRS kit in 1992. The kit was no. 3522 followed soon after by no. 3523. The major difference was the inclusion of 2 separate M26 rocket pods. Jump to 2015 and Dragon has released a “new” version of this incredible artillery piece.

In 1992, the kit suffered from several issues such as the link length track, poorly rendered road wheels, and attached support arms and shocks. This new release has not rectified any of the issues. The only difference between this kit and no. 3523 is the inclusion of three small part sprues. Do not expect “Big Foot” track as depicted on the box top. This re-issue still has the earlier style track.

The kit still contains a whopping 746 parts on 18 sprues, a separate lower tub, a piece of clear styrene (you have to cut out the windows), 24-step fold out instruction sheet/painting guide, and small decal sheet. Markings allow either a Bundeswehr machine or one from the 2nd Infantry Division in Korea.

I plan to build an Israeli MLRS and have already purchased the beautiful AFV Club Big Foot track and Legends road wheel replacement parts. These two items will increase the overall look of the kit tenfold. There are several nice PE sets available but as I don’t like PE that much, will settle for what I have and make it work. Royal Model also offers a resin hop-up set but I had no intention of getting that.

The build started by assembling the three pieces that make up the lower hull. My front hull was heavily warped and mis-poured. The front plate was very uneven. Some hair dryer heat and sanding was pretty much needed to make it look nice, flat, and even. The parts are beveled and over the years, this has just gotten worse. I had planned on several options before starting the build. One of these was to leave the cab doors open. This idea immediately came to a stop when I realized how bare the interior cabin was. It is nowhere near true to the original vehicle. Plus, the interior doors are not close to what the real ones look like. The other option was to have the launcher set with the box turned at a 22 degree raised firing position. When I realized how little detail was contained in the turntable, this too went out the window.

After the cabin was finished, the rest of the hull went together decently. The two rocket pods went together well but not so the rails. These also suffered from poorly designed pour lug attachment points. Lots of careful cutting and sanding and they still suffered from assembly. The pod rails also suffered from this effect. When I mounted the rails inside the box structure, none of the four sat perfectly flush or straight. When I fit the completed pods inside the box, they were not going in without a lot of force. I sanded down the sides thinking this would solve the problem. I was wrong. After some careful consideration, I ended up chopping off the whole rails and only using the first inch (visible part). After some more test fitting, there was still an issue with the pods themselves. I could get them to sit flush up front put the rears were not even close. The pods were hitting the hydraulic cylinders! So….yep, off they came. This made it slightly easier and I figured I could force-glue the rears in once painting was finished.

The last part for the painting process was attaching the tow cable and mud flaps. Well, if you can find the Eureka aftermarket cable set you better order it. What Dragon gives you is barely useable. Also, no mud flaps! This was unbelievable. All three generations of Dragon’s box art show all the vehicles with them, but Dragon did not include them. Luckily, this is an easy fix with some thin styrene and my hex nut punch. Of course, why Dragon has never included them in the first place is beyond me. I mean, that just cries out to be done in PE (for which they are famous)! The Eureka set was nice and I left off the cable until after painting. Based on numerous photographs, I added a toolbox to the roof. The IDF have not received the AC unit that is positioned there on U.S. M270A1 vehicles. Another distinct feature of all IDF MLRS vehicles is the large stowage box mounted on the rear of the launcher box. This is really not a true box. It is just a four sided device mounted to the roof with no bottom. Also based on photos, I built this out of sheet styrene and some spare resin latches.

Assembling the tracks took place after the base coat of paint. For this, I used Humbrol 72 (Khaki Drill). I wanted to give it a try to make a darker version of the newer IDF shade. Many sites state this is a nice color to use so I figured I would give it a try. Painting went fine, as did washing. The only markings visible on IDF M270A1s are large markings on the rocket box and identification plates on the front right and center rear. The Hull side markings are cut sheet styrene and spare decals while the hull plates were taken from the spares. I believe they are off the Achzarit kit I reviewed earlier. These were painted black and I hand painted the numbers in white. These all seem to be hand painted and I must admit not very well done. So I made sure I matched it. The last painting was the front and rear marker lights, which are another thing Dragon really needs to re-design. The headlights are Stickos and easily applied.

The tracks were installed and the door glass was cut out of the provided clear styrene sheet and attached to the inside of the doors using white glue. The doors were glued on in the closed position. I painted the inside of the glass with black to keep prying eyes from attempting to look inside. I added the two antennas to finish the build.

Some of the upgrades are a nice advantage but I really think they should have considered upgrading the track as well. DS Big Foot track would have been most welcomed (at least by this reviewer). If you want a newer version to build M270A1 MLRS, hit your local hobby shop and pick this baby up. Add a HEMMT and M577 for your own firing battery.

I would like to thank Dragon for re-releasing this kit and providing it to IPMS/USA for review.