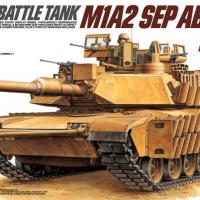 The M1 Abrams tank has been in service since 1980. Since that time, it has been upgraded with multiple improvements. The first M1's where fitted with the 105mm rifle gun. An upgrade to the 120mm smoothbore gun resulted in the M1A1 in 1985. By 1992, the M1A2 was produced that possessed upgrades in its optical, fire control, and data link systems. The end of the Cold War meant new M1A2 production was halted at just 62 tanks, but 566 existing M1A2s were upgraded to the M1A2 standard between 1994 and 2001. Upgrades continued after 2001 with the M1A2 SEP (Systems Enhancement Package).

During the occupation period following the 2003 Iraq War, the number of tank losses suffered by the U.S. military was surprisingly greater than that which was inflicted by the regular Iraqi Army. The thinner armor on the top sides and rear of the turret and hull proved vulnerable to anti-tank missiles, rocket-propelled grenades (RPG's), and improvised explosive devices (IED's) during operations in confined urban environments. Tank Urban Survival Kits (TUSKS) were thus developed for the Abrams in response to these threats.

The kit comes in the usual sturdy cardboard box from Tamiya. Inside you will find 9 tan plastic sprues, 1 clear parts sprue, a lower hull section, two sets of vinyl one-piece tracks, a black screen, polly caps, a decal sheet, and an instruction book with an info sheet on the history of the Abrams. There are two figures included with the kit, the loader and the commander. Upon first look, this seems to be a shake and bake kit from Tamiya. By this, I mean some old tooled kit parts with all-new tooled kit parts from the turret up, along with the TUSKS parts. The lower hull section part is stamped with the production date of 1982. So I am assuming that Tamiya took parts from their old kit’s lower hull and threw in all-new tooled parts for the upper hull/turret . I will say that this is the only kit that I know of that represents the TUSKS system for the Abrams in kit or plastic form. Overall, the parts look clean and flash-free.

The build starts with the lower hull and running gear assembly. You need to decide up front if you are going to build the TUSK I or the TUSK II version, as there are different parts and steps in the instructions for each. The tracks are one-piece vinyl and can be glued together with liquid cement. I used Tamiya liquid cement throughout the build. The instructions call for the tracks to be placed on the tank and the side skirts cemented in-place over them. I left both off temporarily to do the painting and weathering. The driver’s periscope lenses are missing, but there is a clear thin sheet of plastic provided to cut periscopes to size and fit.

The next part of the build was the turret and main gun. The turret comes in two halves, top & bottom. I had no fit problem here at all. The main gun comes in three pieces, two sides and the front muzzle. I would have liked to see some slide molding here with the main gun. It goes together well, but there is some sanding needed. Be careful, as the plastic is soft and you could sand too much away. The turret basket needs to be cut to shape from the black screen provided to make the bottom mesh. Again, the loader’s and the commander’s periscopes do not have anything there and, once again, you need to cut all the periscopes from the clear plastic sheet. There are a lot of clear ballistic windows to protect the loader and commander while they are manning the MG's with the hatches open. I masked all of them for painting.

After both the hull and turret were built, I started the painting. I gave the model a primer coat of Tamiya white primer. I then sprayed the entire model Tamiya NATO black. Then I gave the model its base coat, my own mix of Tamiya colors. At this point, I applied the decals. I put down a coat of Future where the decals would go and applied them. I gave the model a coat of Dullcoat. I weathered the tracks and hull. I then installed the tracks and side skirts. More weathering with AK Interactive products and washes. The turret received the same weathering as the hull. I add the two antennas, stowage (the netting, chain, ration boxes, and water bottles were not included with the kit); all other storage came with the kit. I painted the two figures using the guide in the instructions. The completed model represents a vehicle from the 1st Battalion, 22nd Infantry Regiment, 1st Brigade, 4th Infantry Division, Baghdad, July 2008.

I found the kit well engineered, and it flowed together very well. Despite the older parts, the kit builds into a good example of the Abrams TUSKS vehicle. I would recommend this kit to all. I'm sure that the aftermarket companies will be knocking down the doors to produce products to complement this kit soon. I would like to Thank Tamiya USA for providing this kit for review, and IPMS-USA for selecting me to review it. A very enjoy build, at that.