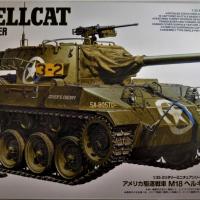 Tamiya has released a newly tooled kit of the M18 Hellcat. There are six new sprues along with a clear sprue from their M4A3E8 kit and a sprue for the 50-caliber machine gun that is from past kits. A decal sheet has two marking options. A length of black thread is used for the tow cable and has enough for two lengths. Two poly caps are included in a small bag. There are no photo-etched parts. The black and white instruction booklet is 16 pages long with 37 construction steps. A separate color three-page, tri-fold supplement has the two painting/marking schemes and a history of the M18 in eight languages. Something different with the instructions is that it shows painting and decal marking locations in each step, plus they are also on this supplement.

Construction starts with the lower hull which is made up of three flat pieces and not a bathtub style like older kits. The fit is great with a lot of interior details molded in, and the hull builds up in square. The suspension comes next and looks very complicated, but it is not. The idler arms are molded with the suspension arms already attached and they fit perfectly into the location holes on the hull.  The rear road wheels have an open slot on the bottom that fits into two pins on the lower run of tracks. This is a great idea that will help align and lock in the tracks later when they are installed. The rear idler wheels are made up of four parts to get the lightening holes correct. The sprockets are the only wheels with poly caps in them, something usually for Tamiya kits. The other road wheels just glue directly into place before fitting the tracks. The tracks are the link and length style. They clean up easily and fit perfectly to the road wheels.

The only difference I could find between the two M18 versions offered is in the front fenders. This is the only step that gives an option between two styles. The side fenders fit great onto the underside of the upper hull. The plastic screens for the engine intake and exhaust are molded very finely. The interior of the driver’s and co-driver’s hatches have interior detail and periscopes, so they can be glued in the open position. But there are no interior hull details, so look for an aftermarket add-on later. The turret has quite a few knockout pin marks, so I spent some time removing them. Most were covered up later with interior details or hard to see, so this added step can be omitted. The turret come in two pieces with a small seam in the back, but that will be covered up by the extra track links.

The gun breach looks very good and is highly detailed, but the gun barrel does not move up or down. The mantle canvas cover is molded in three pieces with the seams along the real sticking seams. This looks awesome when assembled and has a nice canvas texture to it. I left the cover and barrel off to paint a slightly different cover later. I left the front bracket mount unglued on the turret side brackets to slide the star decal into later. The machine gun barrel needs to be drilled out along with the antenna mount for a wire antenna later. The figure builds up with no seem gaps and even has a paper map to be cut out of the instruction sheet. A few extra 76mm rounds and four 50 caliber ammo cans are included.

I painted with Tamiya paints, sealed with a clear coat, and needed a few applications of decal setting solution to get the decals to settle down on some complex surfaces.

Overall, this a great, new kit with excellent fit and engineering. I would like to thank Tamiya and IPMS for the opportunity to build and review this fun kit.