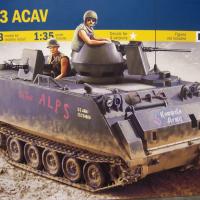 The M1113 is one of the most famous armored personal carriers in the history of military vehicles. It entered service in the beginning of the 1960’s and was the most widely used armored vehicle of the U.S. Army and the U.S. Marine Corps in the Vietnam War. Capable of Carrying a fully equipped infantry squad, it proved its mobility, reliability and efficiency in the very difficult operational environment of Vietnam characterized by swamps and jungles. The “armored cavalry assault vehicle” or “ACAV” version was developed very soon to improve the fighting effectiveness of the M1113. The new features implemented on ACAV version were a circular turret armor for the commander’s M2 12.7mm machine gun and two additional 7.62mm M60 machine guns, protected by shields, and fitted on either side of the top cargo hatch.

Inside the box we find four sprues that are from the original Italeri M113 kit release, two sprues from the Academy M113 ACAV kit, new water slide decal sheet, and instruction booklet. Even though this kit is marketed as a 2016 new release it clearly is a re-box with some Academy parts thrown in to help it along. The older parts show their age with sink holes, ejector pins (both sunken and raised, some flash, and mold seams. The kit comes with a very basic interior. The decals are the real gem here as they are new and represent four different units that used the M113 ACAV in Vietnam. I found the plastic of the Academy parts to be soft, so be careful when sanding not to remove too much detail. The instruction booklet has 17 steps to complete the finished model.

The kit instructions start with the lower hull, drive train & tracks. The tracks are individual links with longer runs molded for the bottom and top, with individual links around the drive sprocket and return roller. All the tracks had raised ejector pins that had to be sanded off. The fit was tight and I had to cut down one link on one side to make it fit. If you are going to buy and build this kit go out and purchase a good set of aftermarket tracks to replace the kit ones. The Instruction then moves on to the interior, which is very basic. It is represented with bench seats for the infantry squad and seats for the commander and driver, floor plates, a fuel cell, plus a set of joy sticks for the steering in the driver’s area. No engine is included with the kit. The rest of the instructions build the upper hull, hatches, and outer vehicle details. There are some fit issues, but with a little sanding do go together ok. All the hatches can be positioned in either the open or closed position. Some basic bed rolls, boxes, ammo cans, and weapons are included to add some “lived in” detail if the modeler so chooses. The decal sheet has four units to choose from and is new and looks great. There is no antenna included with the kit just the mount, so I added a brass antenna.

Even though this is a re-box kit with older parts from Italeri and parts from the Academy mixed in, the kit does build into a good representation of the subject vehicle used in Vietnam. With that said the kit does show its age with several issues as stated above. The decal sheet is new and is a great addition. Since this is marketed as a new 2016 release I was hoping for Italeri to use some if not all the new modern molding techniques that would include better details, better fitting of the parts, and elimination of or hiding of issues like ejector pins and sink marks. Even with all these issues and the kit building (with work) into a good representation of the vehicle, I do recommend this kit but with reservations.

I would like to thank Hobbico and Italeri for the review kit and IPMS USA for allowing me the opportunity to build and review this kit.