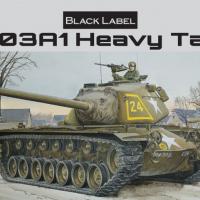 The USA managed to muddle through World War 2 utilizing the M4 Sherman Medium Tank as the mainstay of its armored forces. However, as the Germans introduced better armored tanks with ever more lethal main guns, the M4 Sherman became increasingly vulnerable. It wasn’t until 1945 that the US finally introduced into front line service its first Heavy Tank, the M26 Pershing with its more potent 90mm main gun and better armor protection. With the Germans and Japanese defeated in WW2, it soon became apparent to the US that its former ally, the Soviet Union, was becoming its main potential adversary in the post war era. And the Soviets were fielding some very impressive heavy tanks of their own, such as the IS-3 and the T-10, and that the US would need to beef up its own forces with suitable weapons to match those in the Soviet arsenal.

US tank designers produced the prototype T43 in 1948, and from this was developed the T43E1, which mounted a 120mm smooth bore main gun in its giant turret. With the outbreak of the Korean War in 1950, the US was caught flat footed, forced into utilizing outdated WW2 designs like the M4A3(76) and the M26 Pershing, and a so called “tank scare” ensued. From 1952 to 1954, the Chrysler Tank Arsenal at Newark (Delaware) built 300 T43E1 tanks, but as testing continued, it was discovered that the vehicle suffered from numerous inadequacies. These were worked on and eventually the US Army took on board 80 of the tanks, while the USMC ultimately took on board 220 vehicles, with the vehicle gaining the in-service designation M103, and by the time the USMC finally received their upgraded versions, the M103A1. The USMC seemed to appreciate their tanks a lot more than the US Army, as the Army only kept theirs in service until 1963, and it was the only tank to enter service that wasn’t given a nickname (Sherman, Pershing, Patton etc). The USMC on the other hand continued to utilize their vehicles until 1972, including an upgrade to M103A2 status, which utilized a diesel engine plus other refinements.

Dragon Model’s M103A1 Heavy Tank kit is the first injection plastic model of this vehicle ever produced in 1/35th scale, and the first in a new series from Dragon called “Black Label”. The kit is a mixture of new tooled parts specifically for the M103, parts from Dragon’s M48 tank series, and their M2/M2A1 half track kits (machine gun).

What you get in the kit:

As with many such “amalgamation kits” from Dragon, the modeler is left with numerous surplus parts following the completion of the model construction sequences. Dragon also made an error on their original instruction sheet, so there is an addendum included, so look for this when you open the box and make corrections on the main sheet accordingly, to avoid issues.

All the kit parts appear to be generally very well detailed, without ejection pin marks or sink marks, though there are some real curiosities in the kit, which I will detail as we move through the construction sequences. It was as if Dragon was in two minds about what sort of kit this was supposed to be: a highly detailed armor model as we are used to from Dragon, or some sort of dumbed downed kit harking back to the 1970’s?

Things did not start off well for Dragon, as the addendum instructions are in Section 1 (as well as 8 and 16), and cover the drive sprocket area!! Dragon molds the main road wheels for this kit in FOUR parts, two wheel hub parts, and two parts for the rubber rims. I suppose this was done for ease of painting, as you can assemble the hubs, paint them military green, and then paint the black rubber rims separately, so no masking issues. The way I build models, this just seemed added parts for no particular reason, and I glued them all together, and painted them as a unit. The M103A1 had lots of road wheels, so the modeler will spend lots of time cutting out parts, removing the seam lines, and gluing parts together. Section 2 has the modeler attaching lots of bump stops and other lower hull detail parts. Just pay careful attention to Dragon’s instructions, as to be honest these can be a tad confusing, at least to me!

Section 3 sees the modeler start assembling the upper hull parts, with Dragon providing a separate driver hatch, but with no interior detail in this kit whatsoever nor any crew figures, I glued this shut. Also refer to part D10. This appears to be the protective cover for the external fire extinguisher mechanism. It apparently should not be seen on M103A1’s, being a later feature seen on A2’s. Dragon has the modeler glue the lower and upper main hull parts together in Section 4, having already installed the track return rollers. I glued the upper and lower hull parts together BEFORE installing any of the wheels, as I just felt it looked like it would make things easier.

Section 5 has the modeler working on the rear hull plate. The main plate part, B1, has rather poor bolt detail. Section 6 has the modeler attaching the main engine deck parts, and parts B28 and B29 did not fit well at all to the main hull parts. Regarding parts D11/D12 (four of each) on the lower hull, make sure you get them the right way round. Section 7 covers the installation of the main gun travel lock. It can be positioned in the deployed set up, or stowed. If the latter, you will have to study Dragon’s instructions very carefully, and then fiddle around until you can get them to fit in their storage clamps.

Dragon for some reason has the modeler add the road wheels and associated road wheel arms in Section 8. I in fact installed the arms back when I worked on Section 2’s parts, minus the road wheels which I left until later, for painting purposes. In Section 9 and 10, the fenders and add on parts are tackled, and Dragon has the fender parts B17 and B16 reversed. In Part 11, make sure you drill out the ends of part B24, and you might want to replace the headlight lens parts A13, with either appropriately sized MV lenses or by using some clear two part epoxy. I used MV Products lenses for my vehicle.

We now move to Sections 13 through 16, the turret and main gun assembly sequences. Dragon gives the modeler a 7 part commander’s hatch, but again, no interior detail, nor crew figure to put in the hole if the hatch is left open. However the loader’s hatch is molded integrally with the main upper turret unit, part F44. I can’t remember when the last time I saw this on a 1/35th scale armor kit, but it had to be sometime in the 1970’s?? The main gun is a nicely molded one piece unit, part F15, though on the instructions, this part isn’t actually named! Also, despite it being depicted in the Ron Volstad painting of an M103A1 on the boxtop, there is no dustcover for the gun mantlet contained in the kit. This has appeared nicely molded out of DS100 rubber (as used on the tracks) on say Dragon’s M4A2(76) Russian Sherman kit, so the firm is quite capable of supplying this (to me) essential part. But they chose not to with this kit.

Painting and Decaling the Model

I painted the model overall Tamiya NATO Black XF-69, having first primed the model with Gunze Mr. Surfacer 1200 to allow for the plastic and PE parts. Following this, Tamiya XF-62 was airbrushed overall, then the base cote was mixed with Tamiya XF-60 Dark Yellow, to lighten it, and this was used as a panel highlighter. Tamiya Clear Gloss was then applied overall, followed by the Cartograf decals contained in the kit. As with all the Cartograf decals I have ever used, these went down exceedingly well with the use of decal setting solution. More Tamiya Clear Gloss to seal the decals. Then various pin washes were used utilizing oil paints such as burnt umber. When everything had thoroughly dried over a three or four day period, I finished up with a couple of light coats of Testors Dullcote.

Now here’s something to be aware of when it comes time to install the turret to the hull. Turn your attention to the Volstad box top artwork again, and note that the artist depicts the turret of the tank pointing the main gun off to the right side, at about the 2 o’clock to 3 o’clock position. I am not sure if Volstad knew something Dragon’s design bureau apparently didn’t, but this is in fact the way the turret MUST be depicted. For you see, back in assembly Section 6, when Dragon had you installing the rear upper hull deck, the modeler is required to install parts B10 and B11, engine exhausts. These are raised above the main engine deck. And the way Dragon has shaped the underside of the turret rear bustle, it bangs into parts B10/11 if you try and point the main gun directly forwards. And this is because Dragon has inaccurately shaped said rear turret area.

In fact there are a number of issues with this kit, when it comes to being completely accurate. Along with the rear turret shape issue, there is the matter of the main gun/mantlet area being in fact too short. Not just a millimeter or two short, but apparently as much as two full centimeters. The hull, while approximately the right length, has a number of issues as well. I won’t get into the accuracy/inaccuracy debate; I would recommend someone who is interested in such a discussion to visit this page for a start: https://vodnik.net/pages/M103A1/m103a1.htm

So where does this leave us? Well, if like me you really want a 1/35th scale model of the M103A1, I doubt you are going to see any other mainstream model manufacturer produce a kit in injection plastic now that Dragon has issued theirs. Other than the few fit issues, and detail issues I have mentioned in this review, the model does go together quite nicely, and is reasonably well detailed overall. A major feature of the M103A1 was its honking great main gun, and having this turn out to be 2cm short takes away from the effect of this gun’s “massiveness”. Thus you might wish to purchase the model, and await a “fix” for this obvious problem area? And have the turret pointing in a direction that masks the fact that it won’t fit over the rear hull exhaust area. The model, in the end, certainly looks like an M103A1. My thanks to DragonUSA for providing IPMS USA with the opportunity to review this kit.