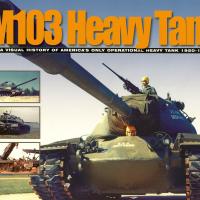 During World War Two, the Allies encountered German tanks with heavier armor and more powerful guns than those the Allies possessed. The US initiated development and testing of heavy tanks in 1943 as the armor on the M26 was not thick enough to stand against the latest German guns. The war ended before the US Army could deploy a heavy tank in Europe, but a need was recognized for a heavy tank to counter the deployment of the IS-3 by the USSR. The T43, mounting a 120mm main gun and a new V-12 engine was selected as the new heavy tank. The T43 became the basis for the M103, America's only operational heavy tank.

This volume, by author David Doyle, is primarily a photo album covering the development and employment of the M103. In addition to the photographs the book provides a synopsis of each vehicle in the development process and several comparative graphs.

What’s in the Book

The book has 120 pages of clear black & white and color photographs. The photos are clear and sharp and cover the vehicles from all angles, starting with the T43 prototype and running through the T43A1, T43A2, M103, M103A1 and M103A2. The photographs include the vehicles undergoing testing, deployed with both US Army and US Marine Corps units, and include a large selection of detail photos. There are also numerous clear, sharp photos of the interior of both the turret and the drivers position. Additionally the last segment covers the only variant built on the M103 chassis, the M51 Heavy Recovery Vehicle. Included in this segment are one B&W and four color photos of the M51 operating in South Vietnam with the Marines.

I highly recommend this book. The photos are clear and the illustrations and meet the high standard we have come to expect in Mr. Doyle's previous books.

I would like to thank the author, David Doyle for the review copy of M103 Heavy Tank.

T43 secured for travel, with turret traversed to rear and main gun secured in travel lock.

Various high-quality black and white photos of the M103

Line-drawing of the M103