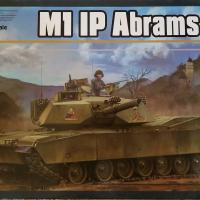 The M1 IP (Improved Performance) Abrams was produced briefly in 1984 and was a transitional tank to the M1A1. Some of the upgrades included a new “long” turret with thicker frontal armor—upgraded from 650mm to line-of-sight thickness of 880mm. 894 M1 IP tanks were manufactured for the US.

This PANDA kit was released in 2018 and is a re-issue with new parts from the original kit which came out in 2017. The box contains one clear sprue, PE, one waterslide decal sheet, brass wire, upper & lower hull pieces, and seven sprues (four of them dedicated to the tracks). The parts are molded in dark yellow plastic. The detail is fair. This kit has a large amount of injector pins and injector pin remnants attached to parts. Some parts had a moderate amount of flash which required cleanup.

The PE was problematic. It is covered with a protective plastic sheet on both sides of the sheet. I expected these to be static cling material and was surprised that they had been applied with some kind of adhesive. Granted, this stickiness could be due to age. When I removed the protective sheet, a stubborn residue remained. I attempted to remove it with hot water and detergent, lacquer & thinner, mineral spirits, acetone…and nothing worked. The sticky residue was attracting dust and dirt. Finally, I soaked the sheet in some apple cider vinegar and the reside came off somewhat, but not fully.

The eleven-page instruction guide is generally easy to follow, but there are several assembly steps which entirely missing and must be interpreted by the drawings. A few parts are also misidentified.

The kit contains individual track links. Although they are technically not 100% technically correct, they piece together quite well and look really nice when completed.

The idler arms are keyed into static position on the lower hull. A nice aspect of the wheels is that they are constructed from exterior and interior wheels and separate tread rings. This allows you to paint all the treads black first. I actually forgot to take advantage of this, and it increased my work somewhat. But you should paint these black first, then paint the wheels and then fully assembly them.

The upper hull has a moderate amount of engraved detail. Several PE pieces are added, and they fit well. Two small hatch covers, the driver’s periscope and other small pieces are added.

Construction of the turret is largely problem free. The barrel is assembled from two halves and with minor sanding looks nice. A Hoffman Device is to be attached to the fume extractor. Warning: by the time you reach the painting & decal stage, you will discover that two decals are supposed to be placed on the right and left sides of the fume extractor. Since I build the sample according to the instruction, the Hoffman device was in place…but I couldn’t get the decals to slide underneath its brackets. So, to avoid this pitfall, either leave the Hoffman device off OR wait until the very end to attach it.

There are two sets of turret side stowage racks. One set is on sprue E and the other on sprue B. According to the instructions, you are to use the ones from sprue E, but there are too small. Use the ones from sprue B…they fit! But they are fragile, and the attachment points are not well defined. Use caution when cutting the rails from the sprue. The bustle rack rails & the turret side rails are riddled with injector pins. It took some effort to carefully remove and clean them up.

The fit of the coaxial gun is a bit loose and I had to reglue it several times. The bustle rack is fragile. The PE fits very well but mounting the bustle rack to the rear of the turret is tricky. There are no clear attachment points so test fitting and positioning is a must.

The turret ring has two snap tabs, and the intent is to press the turret down into the opening on the upper hull. But the opening has no slots (in other words you don’t insert the turret and twist it into position). For me, too much pressure was being required and I feared that something would break, so I scraped plastic off of the opening to increase its diameter a little bit. This solved the problem.

The guns are not very impressive. To begin with, if you look at the photo of the parts trees in the upper left-hand corner, you will see that the main gun is molded in such a way that the barrel is actually bent. This was nearly impossible to correct. For me, none of the gun parts fit very well, and I would be tempted to omit them all together. The main gun has an ammo can attached and this piece is supposed to be dressed up with a piece of PE. If you look at the photo, you will see how the plastic ammo can piece is too big and does not fit with the PE. The solution is to sand down all of the raised detail of the plastic piece. The instructions do not mention this.

The tracks come together nicely. You begin by joining two pieces with the middle coupling and the adding the outer and inner collars. It took me three hours to put them all together.

The instructions seem to imply that you should glue the side armor skirts together first and then attach the entire thing to the side of the tank. In my opinion you will have a better outcome if you attach the front piece first and proceed one by one until you reach the last piece by the drive sprocket wheel.

One of the last details (if you pick to model the Canadian Army Trophy version) is to create a disk out of styrene plastic for the decal. The disk is 26mm in diameter. I used one of my circle templates to draw the circle and then I cut it out roughly and then finalized the circle. I primed this piece, painted it green, and then applied the decal.

Prior to painting, I primed all of the parts with Tamiya gray primer. Throughout construction, I painted parts in a base coat of green using Mission Models Dark Russian Green Faded. I shaded it with lighter coats of this color mixed with one part light gray. I used several Vallejo washes on all surfaces and a few dry pigments.

I consider this an average kit. In my opinion, the large amount of injector pins which need to be removed, the stubborn residue on the PE left behind by the protective film and the poor fit of the turret are significant detractions. Although I was able to figure out the missing assembly steps by interpreting the diagrams, less experienced model builders could potentially be very confused. The individual track links are easy to build, fit well, and make the model look pretty nice. The PE detail is good and fits pretty well in most cases.

Thank you to IPMS for the opportunity, thank you to PANDA Hobby for the review sample, and thank you to Bill and Phil for your continual service.