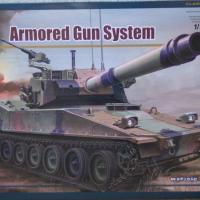 In the 80s, the U.S. Army began to look for a light tank to replace the M551 Sheridan. Specifically, the Army was looking for an air-deployable tank to support its airborne Divisions and to replace their TOW anti-tank HMMWVs. In 1992, the Army selected United Defense’s vehicle designated XM8-AGS. Six prototypes were made and the M8 began trials. The basic armor package of the M8 is made of welded aluminum alloy, designed for rapid deployment and was capable of being airdropped from a C-130. There were 2 additional levels of modular armor planned for the vehicle depending on the threat level of the operating environment. Each additional level obviously increased the weight of the AFV, which decreased it’s “air mobility”, but still kept it light enough that at its maximum armor protection, up to 5 could be delivered via air landing on a C-5 Galaxy.

Eventually, the M8 project was cancelled and the M551 Sheridan was retired without a replacement until the development of the M1128 Stryker. However, in December 2018, BAE, who purchased United Defense, was one of two companies awarded a contract to develop an air transportable light tank to assist infantry brigades in forced entry operations. The company submitted plans for an updated M8 with added capabilities and components. Testing of this new vehicle will begin sometime in 2020. Therefore, what may have looked like a kit of a what could have been vehicle, could be a model of what will become. It just depends on the timing.

So, what’s in the kit. Anyone who has built a Panda Hobby kit in the past, may have the same concerns I had prior to opening the box. Some of the Panda Hobby kits I’ve built have featured over-engineered parts where a piece that could be molded in one or two pieces, required me to use 6 or 7 pieces to build. While I appreciated their attention to detail, much of that detail was completely hidden when the model was completed, and made some parts of the assembly much trickier, and in some cases less sturdy, than necessary. However, upon opening the box, I was presently surprised to see just 5 sprues of plastic with 4 sprues being just a repeat of one sprue used multiple times. Also, the deck of the hull included many molded on details that will take the place of adding some parts. The sprues are clean and crisp, with some very faint flash around just a few parts. One interesting thing to note, is that the individual track links are molded into the outsides of the sprues, and not provided on a separate sprue. This is unusual, but really cuts down on the number of sprues in the box and is a clever space saving design.

Construction starts on the lower hull. The suspension is well detailed and goes together easily. The 12 road wheels consist of four parts each. As mentioned earlier, this is an example of the over-engineering common with Panda Hobby kits, but the parts go together easy enough, and the front and backs of each wheel are very nicely detailed.

The individual track links have some nice details, and are designed to go together without glue. In practice, I needed some when it came to assembling the full run of tracks, and while the instructions don’t tell you how many are needed per side, trust me, you’re going to need every track link provided. This will be a little confusing later in the build, because you are supposed to have two extra track links attached to the side of the turret. I’ll be the first to admit that I’m no expert when it comes to individual track links, but there really wasn’t a lot of slack when I attached the tracks. In any case, no extras come with the kit, so make sure you don’t lose any! I’ve never been that competent with individual track links and these were no different. It took me quite a few minutes, tries, and curse words, but I eventually got the tracks onto the road wheels and sprockets. I think they turned out pretty well and using all of the individual links provide just a little sag across the top run to make it look like a realistic weight.

My hopes of not over-engineering the build were slowly being dashed as the build went along. Good examples of this include both the driver’s, and the commander’s hatch. The driver’s hatch includes 21 separate pieces, including the 5 clear parts making up the vision blocks. The commander’s hatch has 31 pieces, including 6 clear parts and 2 photo-etch pieces. While I appreciate the attention to detail, the number of parts is really an overkill and makes building relatively small parts of the tank much more complicated than necessary. Neither of the hatches include any interior detail, so modeling them open really isn’t an option.

A few small markings are provided on a simple decal sheet, and full color examples of 3 tanks are provided. One in desert tan, one in olive green, and another in a 3-color NATO camouflage pattern. The most common photos you can find of this tank online show it in the green color, which is what I chose to go with.

While the kit can be a little trickier than it needs to be in a few places, and it can be a fragile kit to work with during construction and painting, the end result is pretty impressive. It’s a unique looking tank, and an interesting subject matter. The kit is well-detailed, with some delicate parts that need care during assembly, but the finished model is nice.

I’d recommend this to experienced modelers, with an interest in modern armor. My thanks to Panda Models and IPMS/USA for this review kit.

Thanks, Ike. Your review was helpful. I’m in the final stages of building this and I’m finding the lack of positive seating of the Road wheel halves, the road wheels to their axels combined with the need to mount the tracks tight to be very challenging. In retrospect it would’ve been easier to build the running gear first before painting it. Live and learn. Otherwise, nice kit, but definitely one for more experienced modelers.