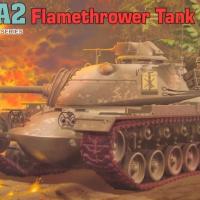 Dragon’s product website states that “Building further on the success of its line-up of 1/35 scale kits of the famous M48 Patton medium tank, Dragon has produced the interesting M67 flamethrower used by the US military. Nicknamed the “Zippo”, it was originally based on an M48A1 tank hull, with the usual 90mm gun replaced with an M6 flame gun connected to an M7A1-6 fuel and pressure unit. The 48-ton M67 was disguised somewhat with its flame gun hidden inside a dummy gun tube. The first M67 was completed in 1955 and a total of 109 units were manufactured for US Marine Corps and US Army service. They were fielded until 1974, which meant they saw combat in Vietnam”.

Let me preface my review by stating that as modelers we do not always follow the instructions step by step. We tend to skip around completing steps in advance while letting previous steps dry or bond. For this build and review, I did indeed skip steps, but I will describe what I found in each step, pros or cons, so the builder will be enlightened as to what needs addressing during the build.

In reviewing references, I have decided to build the vehicle (Y32) which was photographed in Vietnam during 1968 belonging to the H&S Company, 3rd Tank Battalion as seen in Doyle, David. M48A3 in Vietnam. Carrollton, TX, Squadron/Signal Publications, 2010.

The box is a normal size 15” long x 9.6” wide x 3.1” tall heavy gauge cardboard containing 8 grey sprues and one clear sprue all contained in polybags. Also included in the box is one cellophane baggie containing one set of DS tracks, and one baggie containing a braided metal wire and one small decal sheet. Additional items in the box include a DS sprue containing mantlet cover and one six-page instruction sheet divided into fifteen build steps including a paintings/markings guide on the last sheet.

Upon opening any model kit, what I like to look for is the amount of work, such as mold relief tapers, flashing, ejector pin release points (recessed or elevated marks), mold shift points, sprue attachment points and mold seams that need to be addressed during construction. The parts have crisp detail. However, there are several pin release points seen which will have to be sanded or filled. Whether these come into play, I will find out during the construction. The sprues have absolutely zero percent flash and very little seam lines that need to be cleaned up. The attachment points are kept to a minimum and are located in non-discreet areas. The eight sprues included are from Dragons M48 kits, one clear sprue marked H, K and one additional sprue (L) marked M67A2.

The instruction manual is printed in typical Dragon fashion in portrait orientation fan fold. It contains 15 steps on 6 pages of clear uncluttered diagrams. Also, included in the instructions are images for the parts layout on the sprues and one page of markings and painting guides for three “Unidentified Units, Vietnam 1968.” As with all Dragon kits, the parts not used are in blue. Be aware, don’t make the mistake I made by thinking I could remove these parts first. Dragon sometimes mislabels the parts. Additionally, there are paint color references for Gunze Aqueous Hobby Color, Mr. Color, and Model Master paints. The decal sheet was printed by Cartograf.

Step 1: This step is the most time consuming of the build. It consists of building the 14 road wheels, each with 4 different parts, 10 rollers with 3 different parts and 2 sprockets with 4 different parts. Although this step is time-consuming, Dragon has amazing detail molded into these parts and it is well worthwhile. However, Dragon has failed to mold the mud cleanout holes in the sprockets. This did not cause a problem. These elongated holes were drilled out using two different size drill bits (1/16 and 1/32nd) at the 12-4-8 position. There were no other problems noted during the building of the rollers and road wheels. As to historical accuracy, the number of bolts molded onto the wheel and roller hubs seems to be accurate according to reference pictures.

Steps 2 and 3: Consist of adding the lower hull suspension mounts, shocks and lifting rings. This step is where the previously constructed rollers are attached. I saw no issues with these two steps. The fit was nice and the parts went together well. Step 3 has you to install the vision ports which are located on Sprue H, however, I decided to wait till the painting process was completed.

Step 4: Consists of gluing the upper to the lower hull. No issues were seen other than some putty at the front and sides. Also, some cast texturing was added to upper and lower hulls using Mr. Surfacer 500 and 1200.

Step 5: This step consists of building the engine deck which consists of six pieces and the lower hull plate. The engine deck (part D43) lacks the welded sections as seen on reference pictures. Reference pictures show the rough cast texture on the sides. Dragon also missed including the diagram for building the lower hull plate (part 35) which includes mounting the taillights and towing pintle. These parts are included on sprue J and are designated as not being used on the sprue layout page. “Now this is one reason to not remove the parts Dragon describes as not being used”. The modeler can refer to a previous build of Dragons M48 or good reference material including books and the web. I have included a web link to Dragon’s directions for the M48A3 Mod B Kit # 3546 rear hull plate. https://www.1999.co.jp/eng/image/10228248/70/2. Part D 36 has two pesky ejector pin release points which come into view if not filled with putty or filled with punched out plastic stock.

Steps 7,8 and 9: Consist of adding the boxes and fender guards to the fenders. I would suggest adding the fenders to the upper hull first before placement of these parts due to the need for filling the gap between the fender and the turret ring. Then the boxes, etc. can be added. No other problems were noted with these two steps. Also during step 9 the two headlights and guards are assembled.

Steps 10-13: Consist of assembling the turret basket. These parts are very delicate so a razor saw is a must to remove individual parts. The turret stowage rack lacks the wire mesh as seen on reference pictures. This can easily be added with aftermarket photoetch or wedding veil material. Also, step 10 consists of building the turret cupola with the 50cal MG which Dragon has molded with the barrel drilled out. Vision ports are also added during this step. Dragon lists the length of the wire for the towing cable to be cut at this point.

Step 14: This step has you cut 4mm out of the barrel cover then glue the parts together. I was surprised that Tamiya Extra Thin Cement works so well. There are several mold seams on the mantlet cover sides that I was able to remove using this cement. Also during this step, the M6 flame gun barrel is constructed. Dragon provides a choice to use the DS mantlet cover or not.

Step 15: This step brings everything together including the hull, turret, and tracks. Then we’re done.

Tracks: The tracks have several ejector pin release points both depressed and elevated which will have to be to taken care of. Also on the end connectors is a seam line which can be smoothed out using a metal small spatula and Tamiya Extra Thin Cement. There are several other options one could take to replace the tracks including metal, link to link etc. It would have been nice if Dragon would have included their Magic Tracks instead of the DS Tracks. Tracks were primed with Vallejo Black Primer 73.602 then sprayed with a coat of A. Mig Dark Tracks 035. Finally, the rubber pads were hand painted with Vallejo Panzer Aces Dark Tracks 306.

The wheels primed with Vallejo Olive Drab Primer, then painted with A. Mig 081 US Olive Drab Post WWII, FS 24087 same for the hull. Decals were applied using Microset as the setting solution. They laid down nicely without any appearance of silvering.

Usually I weather my models with pigments and paints to show realistic appearance in a setting, but in this case, I did not, so the detail Dragon has achieved would show through.

After completing each kit, I ask myself, “would I build this kit again?” In regards to this kit, my answer is “most certainly yes”. If an M48 has been constructed before, then this is a straightforward build. With only a few changes. This definitely was an enjoyable build and a good addition to the other M48’s one has on their shelves.

Note: I inadvertently forgot to attach the towing cables. I didn’t notice until the tank was completed. The towing cables are only glued on but, they do have attachment points on the rear of the turret. They are supplied as metal wire with molded straps.

Thanks to IPMS/USA and Dragonmodelusa for allowing me to review this kit.

Finished model of M-67
Previous Next