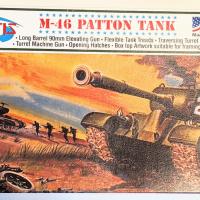 Remember these? This kit is from the dawn of armor modeling in the 50's. Aurora had a series

of 1/48 tank kits that included the Stalin III, Chi Ha, M-109, Swedish “S” tank, Centurion, M-70, and Churchill, none of which would be modeled in any scale for literally decades. This is the Atlantis re-release of the M-46 Patton.

There are 127 parts, including four crewmen. The tracks are of the rubber band type, but have decent detail, especially given the age of the kit, join together and fit well. The overall kit detail is on the sparse/simplified side and the turret MG is cartoonish, but over all it does look like a Patton. The lifting eyes are given as rings that you fit into slots in the turret and hull whereas in real life they are more inverted “U” shaped, but this is easily fixed by just nipping off one end. The main gun muzzle brake is decently done, but the barrel end needs to be drilled out. There are no brush guards for the lights.

Fit is problematic in some areas and shimming and putty were necessary to close some of the larger gaps. There was also lots of flash and mold seams, but remember these are almost 60 year old molds. I drilled out the main gun barrel and the exhausts, and had to retexture the turret after I fixed the huge top/bottom seam. I added the stiffening ribs to the fenders as they were large flat areas with no detail. I deepened the rear deck engine vents to better allow them to retain the black wash that would give them depth, and added handles to the commander’s and loader’s hatches. The .50 cal. MG would be a project in itself and given that this was just for a review, I did not want to spend the money on any pricey replacement part.

The paint color was MM Green Drab, but with weathering and washes, it looks more brown than green.

This is not a kit for a serious armor builder. It can, however, be a fun trip down memory lane and would make a nice gift for a youngster. It also might make a good father/child joint project, but I’d stick with one aged 12 and up as some parts as small and the fit problems could be frustrating for a real beginner.