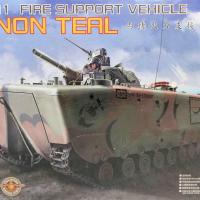 At the end of WW2 Industries within the US were encouraged to design more sophisticated military equipment based on experiences gained during the war.

The US Navy Bureau of Ships invited multiple civilian engineering firms to submit proposals for a new tracked landing vehicle (LVT). The Borg Warner Company submitted a design for a new LVT. The prototype was completed in August of 1951. It’s large box like structure could transport 34 fully equipped infantry and possessed excellent seaworthiness. The vehicle was designated the LVTP5. Developed concurrently with the LVTP5 was the LVTH6, the support version armed with a turreted 105mm 24L Howitzer. The LVTH6 entered service in 1957 with 210 units produced.

The kit is produced by AFV Club, a well-known model company. The box art work in outstanding! The scene depicts marines landing on a pacific island beach.

The kit consists of over 200 parts and comes on 18 green sprues. Included is a nylon molded mantel, a photo etch fret, a metal turned barrel, and string for the cable. All the parts are nicely molded with very nice detail and no flash. All panel lines are recessed and all the sprues have narrow gates. The 20 page instruction sheet shows the suggested assembly through 21 steps starting with the one piece hull and bogey wheels assembly, and progressing through to the final assembly of the turreted 105 Howitzer.

The kit fits together very nicely and there were no areas that required filler. I assembled the drive and bogey wheels in steps 1 and 2 but did not attach them to the hull as suggested in the instructions. Instead I assembled the entire hull as suggested in steps 3 and 4. I skipped the track assembly in step 5, and continued adding the hull details in steps 6 through 9. I then completed the turret assembly in steps 10 through 21. I then painted the hull and turret choosing the Republic of China Marine Corps painting option. I also painted the drive and bogey wheels separate from the hull. I then very carefully pried open the distance from the side skirt and hull, and inserted the bogey wheels, linkage, and drive wheels. I had painted the wheels separately to aid in the overall painting of the hull, wheels, and linkage.

Now I returned to the tracks in step 5 for their assembly. I painted the tracks a dark brown while on the sprues. (Look at the included photo of the track assembly.) I was a little hesitant about assembling the tracks since the parts came in both straight and single tracks. So the “S1’s” were straight lengths of tracks, I glued the two “S1” sections together and slid them into position over the top bogey wheels and between the hull and the skirt. Then I used the single piece “S5’s” to work my way around the drive wheel gluing each separate piece together. “S4” is the straight length going from the curved S5’s of the drive wheel to the second set of single “S5”s to go over the first bogey wheel. Using the same method I worked my way around the tracks. It actually worked very well and I’m very pleased with the results.

I chose one of the standard Republic of China Marine Corps option. I painted the hull and turret as shown using Tamiya paints.

An extensive decal sheet is included comprising all 7 options. The decals are thin and are printed within registry. The decals lay down with no silvering.

Overall the kit is a joy to build and builds into a nice LVTH6A1. I really like building AFV Club kits due to their fit and detail.

My thanks to AFV Club and IPMS USA for the opportunity to build this great kit. I look forward to building more AFV Club kits in the future.