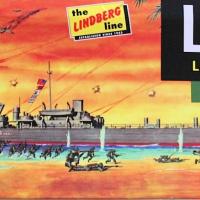 The LST (Landing Ship Tank) was developed during World War II. Despite its size, the LST had a very shallow draft allowing it to load and unload on shore and at low tide without docking which was essential during the D-Day invasion. The power was provided by diesel engines driving two shafts and propellers. Speed was around 9 knots.

The kit is produced by Round 2 Models, a well-known company who bought the Lindberg Line and is re-issuing the kits in very colorful packaging. The box art work in outstanding! The scene depicts marines landing on a pacific island under fire while in the air Corsairs are shooting down Japanese Aircraft. Great art work worth framing but these ships were used mostly in the European Theater of Operation.

The kit consists of 61 parts and comes on four grey sprues. The parts are nicely molded, but there is a considerable amount of flash. This is to be expected keeping in mind the age of the molds. All panel lines are raised and all the sprues have large gates. The 6 page instruction sheet shows the suggested assembly through 12 steps starting with the rudders and anchors being assembled to the one piece hull, and progressing through to the final assembly of the threaded railings and adding the landing craft to their cradles. Early in the construction process you need to decide which ship you are building. The options are LST-393 D-Day 1944 or LST-393 1945/Present (the only difference being the paint scheme); LST-325 D-Day 1944 or LST-325 Present (again the only difference being the paint scheme); and MV Highway 16. LST-325 is currently a memorial ship in the care of the USS LST Ship Memorial Inc in Evansville IN. It is open for tours daily and comes highly recommended. MV Highway 16 was originally constructed as a wartime vessel; LST-393. As MV 16 she was used as an automobile transport from Milwaukee to Muskegon MI. Today MV 16 has been repainted to resemble her original role and is berthed in Muskegon as a military museum ship and also comes highly recommended. There are decals provided for all five options.

The kit fits together very nicely but there are a couple of areas that required filler. When gluing the two-piece deck to the one-piece hull there is a considerable gap between the two hull pieces. This was filled in and sanded smooth. I had no problems with gluing together any of the remaining assemblies and did not have to use any filler at all. But all the pieces did require cleaning up of flash. Again please remember that the molds for this kit are getting old and the flash is to be expected. I built this model as LST-325 D-Day 1944. I did use the thread that was provided in the kit for the railings but I will need to replace it. The thread is very fuzzy and this really shows up after painting.

Overall the kit is a joy to build and builds into a nice LST Landing Ship Tank. There is some flash but is easily cleaned up with a sharp exacto blade and some filler was required.