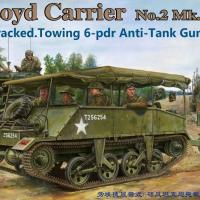 The Loyd Carrier was built upon the mechanicals (engine, gearbox and transmission) of a 15 cwt 4x2 Fordson 7V truck with light steel frame to which armor plate was bolted to the front and sides for minor protection. The engine was at the rear of the Carrier with the radiator places behind it. The transmission took the drive forward to the axle at the very front where it drove the tracks. Both the front drive sprockets and idlers (which were also notched) at the rear of the tracks were fitted with brakes, actuated by a pair of levers by the driver. To turn the vehicle to the left, the brakes were applied on that side and the Carrier would slew round the stopped track.

The upper hull covered the front and sides but was open to the rear and above; as the Carrier was not expected to function as a fighting vehicle this was not an issue. To protect the occupants from the weather a canvas cover could be put up with included frames.

As part of the rapid development program and use of pre-designed parts the Loyd used parts from other vehicles. From the Universal Carrier came the track, drive sprockets, and suspension units and from the Fordson 7V, the chassis, engine, gearbox, torque tube, axle and brakes.

The Army tested the Loyd Carrier in 1939 and placed an initial order for 200 as the Carrier, Tracked, Personnel Carrying i.e. a personnel carrier. Initial deliveries were from Vivian Loyd’s own company but production moved to the larger firms including the Ford Motor Company and Wolseley Motors (13,000 built between them) and Dennis Brothers Ltd, Aveling and Barford, and Sentinel Waggon Works. Total production of the Loyd Carrier was approximately 26,000.

The Egyptian Army received large amounts of armored vehicles from the British. Tank Battles of the Mid-East Wars (1) The Wars of 1948-1973 by Steven J. Zaloga states the Egyptian Army had about 139 Universal Carriers in 1948 when Israel declared its Independence. Nothing is mentioned about Loyd Carriers but on page 12 of this book is a Loyd Carrier marked in IDF markings of the Southern Command and stating that several were captured from the Egyptians who were using them to tow 6 pounder anti-tank guns.

Until the arrival of this kit, you had two options available if you wanted to build this machine in 1/35 scale. You could either scratch build one with the help of the Tamiya Universal Carrier as a donor or the full resin kit from Accurate Armour. Those of us that build Middle East Wars vehicles welcome this kit with the joy of many of the recent releases that have come from many different companies that have started realizing that modelling the Middle East War vehicles is not a small knit set and these vehicles are most welcomed!

Now that the history lesson is over, let’s get to the GOOD stuff. This is a newly tooled kit of this carrier and Bronco has done what appears to be a great job. The box contains 20 plastic sprues done in green styrene, 1 tire, 16 metal springs (for the bogies), a decent sized fret of PE, 1 sheet of markings (allows 7 different vehicle markings), 2 lengths of string, and a 30 page instruction booklet. The last four pages of the instruction booklet are on painting and marking. Bronco has also included a foul weather cover and I really like this option. I was happily surprised to see no ejector pin or sink marks on any of the parts that will make up the interior of the carrier and therefore be visible. I do not appreciate the Link/Length track. I have NEVER had good luck with these types of tracks in the past. We will see if my skills have improved or Bronco did a great job in designing them.

Bronco starts with step one and immediately I get hit with PE application. Four small tabs have to be cut and attached to help hold the exhaust system. Two more are used to attach plastic parts to each other and the only one that makes any sense to me is the fan itself. As I slowly started to assemble the engine I jumped forward and did some pre-assembly of future parts. This is standard assembly for me as it makes the later steps go quicker. Things did not go better as I moved along. In steps 5-8 you are assembling the lower frame. In today’s molding ability of slide molding, why does Bronco chose to have you assemble a 19 piece frame when it could have just as easily been done as one piece? I know this because I have built and reviewed their Jeep kit. I think this section is responsible for several of the errors that attached them to my build. I believe that something did not sit true during assembly. Assembly continued slowly with bending and attaching more PE. In step 14, you have to make 2 exhaust covers out of flat PE. Bronco gives you a mold but no matter how I tried, the mold did not match the parts that the PE would attach to. Also, Bronco does not inform you that you need to snip both at a 45 to even get the parts to fit into the form. After numerous attempts at rolling and re-rolling the sheet I settled on what I have and while not true to the original, it was the best I could do. The next was to cover the engine assembly by assembling the engine covers. These are all styrene parts and luckily glue able. Once again, these did not fit quite right. They had to be forced over the support bars and I am not sure if this ill fit relates back to the earlier frame issues.

It just gets better as you go along! In a continuation of step 15, you get to add the towing hook and mount. The instructions here are not only vague, but not even close to the actually vehicle! Does no one at model companies actually build these kits before they hit the market for consumers? After looking at actually walk around photos, thank you Robert Blokker (walk around pictures) and Mike Roof (who happened to be building a far more detailed version at the same time as I), I realized that parts B4 and B5 (the supports for the actual hitch are not even close to matching the real thing. The supports are straight angle L iron and Bronco, has made them bulged for some reason. Also, even if you remove the bulge, and attempt to get these to fit it will not do so. The easiest way is to remove the whole vertical upright at the mount and just use the base horizontal support. While not the most accurate option, it allows you to place the tow hitch and continue with the build.

Assembly of the link length track continued my nightmare. The Loyd uses two toothed sprockets instead of an idler and sprocket combo. I tried to get the tracks wrapped around both but fear took over and I ended up gluing them to the suspension. I have never attempted to finish a model with the track already attached, so this should be fun. There are several offset links but I was surprised that I actually got them attached. This was a first for me. There usually ends up being a noticeable gap when I am finished.

Assembly continued with the front and sides and PE hull supports had to be snipped and filed as they sat too high over the sides. It was at this point I realized how badly the hull had been assembled. Both sides sit at a very noticeable outward cant. Looking forward, I so not see that there is anything that will attach to pull them back in. The next PE items were the stowage boxes on the inside. These are designed to hold the five 6 pounder ammunition boxes, a wooden box and crew gear. These were ultra-flimsy and did not attach well. The middle attachment point did not line up with the PE. These attachment points are molded onto the inner hull so I cannot see or understand how this inability to align properly could be related to an error on my part. However, as so much of this assembly has been, I can only assume I did something wrong. The left front light guard is a PE part and again, this is not correct. All period photographs that show Loyd’s with the guard, it is made of bar stock! Not flat stock as the attachment of the PE represents. Plus, this was another issue as only the front attachment points are designed to be bent and allow you a flat surface to attach to.

That was it! The last 6 steps are if you want to attach the frame and foul weather tarp. The kit is designed to be configured in four different frame/tarp combinations. These parts are nicely molded and for ease of assembly, I would suggest the tarp completely down. All assemblies require the use of more PE. Two rounded (you have to round with no form provided) supports that need to be attached to three frame pieces and several straps.

The included accessories with the kit are super nice. The only downside to any of them was that the four canteens were already broken at the drinking tube. They take up a small section of the interior and with no mounting options, will not be missed. The vehicle was painted Model Master Olive Drab. The included decals allow you to make one of six different Loyds. The markings are nicely done and none appear to be off center or translucent. One down side was the lack of instrument decals. There are three dials and on detail on them. I was going to make mine from a phot on Tank Battles of the Middle East Wars. It is a plain Loyd with IDF registration number and the three white arrows of the Southern Command. The markings are from the spares box and represent a vehicle with the IDF vehicle circa 1950

I would like to thank Bronco for releasing this kit and Dragon Models USA for the review sample. I believe that is too advanced for my simple skills. The PE was nothing short of disastrous and the too complicated styrene assemblies played into many of the PE parts not attaching properly. This is the only game in town and while I loved the idea of having one in my collection, I will wait for some time before starting another one. If you build this, you need to have a love for all things photo-etched and be a superb assembler of tiny parts. Recommended to veteran modelers.