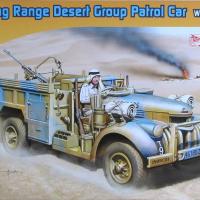 From 1940 until the end of the Second World War, the Long Range Desert Group (LRDG) provided stealthy reconnaissance patrols in Western Europe and North Africa. The vehicle most commonly associated with these groups, particularly when they were in North Africa, is the Chevrolet truck depicted in this kit. Captured weapons were often used and, in this case, we have a 2cm Italian Breda cannon.

The kit is composed of 72 parts on three sprues of soft grey plastic and one decal sheet. The parts are fragile, especially the 2cm Breda cannon, so care should be taken when removing them from the sprue. There’s a color profile and decals for two vehicles.

As with any soft skin vehicle, regardless of scale, assembly begins with the chassis. The plastic on this kit is very soft, so great care must be taken in removing the smaller pieces from the sprue. I was removing the front springs and one of the attachment points broke. Before gluing, I test-fitted the front and rear springs before attaching them to the chassis. The attachment points were not a great fit and it took some fiddling before I was satisfied with their placement. The other challenge was finding the positive attachment points for the brush guard (B5). The instructions call for attaching the guard while you are building the chassis. I couldn’t get a good fit, so I waited until the cab was mated to the chassis. There are two slots in the front cab which the brush guard slips into. It was a snug fit and attaches without a problem. A word about the truck’s tires and wheels – the insides are hollow. It doesn’t bother me, but some might find that feature annoying. The rear tires attached snugly to the rear axles. The front axles have a much thinner and, therefore, weaker attachment point, and it takes a bit of work to keep the front wheels straight while the glue dries.

The body is in two parts, the cab and the bed. The parts went together without any major challenges. The hood is secured to the top of the motor with a solid attachment point. There are two sides that cover the engine compartment. They do not fit well, even after repeated test fittings. By far, the most challenging part of the kit was the 2 cm Breda cannon. As to be expected, the parts are very fragile. The most difficult part of the cannon was part D9, which appears to be the gun sight. The shape of the part didn;t match what was in the instructions, and attempting to find the attachment point was nigh impossible. The other difficult part of the build was the base, part D7. The attachment points are so shallow that it was very difficult to attach the gun to the base. I suppose that’s why they call it Braille scale. I filed the base of the gun flat and used the ol’ Mark I Eyeball to position the gun with its carriage.

I chose the ‘T’ Patrol vehicle from Libya in 1943. I substituted the Mr. Color callouts with Tamiya – Deck Tan (XF-55) for the overall and Light Blue (XF-23) for the stripes. I mixed a few drops of Tamiya Desert Yellow (XF-59) in with the deck tan and it seems to be a close match to what’s on the color profile. Unfortunately, there appears to be another shade of blue that was not identified on the profile, so I just used light blue. I sprayed the vehicle with Future and applied the appropriate decals. They are small, but went on perfectly. I did a little pin wash of brown sienna on the wheels and a dust coat of Tamiya Medium Grey (XF-20).

I found this a relatively quick and interesting build. The softness of the plastic and the poorly defined attachment points certainly made this a challenge, but if you are a fan of the Long Range Desert Group, this kit is for you. My thanks to Dragon Models USA and IPMS/USA for giving me the opportunity to review this kit.