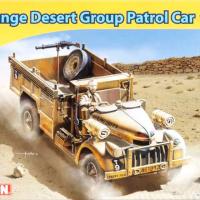 I have always loved reading about the LRDG and SAS during the North African campaign during WWII.  Their ability to make long treks across the desert, attack the enemy at their bases, and return was just amazing.

Finally, a kit has been released in 1/72nd scale of the LRDG’s main mode of transportation, the Chevrolet Model 1533X2 30 cwt 4x2 truck. So let’s take a look at it.

With Dragon’s penchant for slide molding I had high expectations for this model.  While there is some great detail molded in, there are a few areas that are lacking, and even some flash and injection pin marks.  First up is the wheels, which the box top takes pride in showing a separate wheel being inserted into the tire.  Inside the box is a different story.  The wheels are one-piece and they do give a decent interpretation of the tread, but there is also a nice seam that needs to be removed.  Oddly, they are also molded with a hollow back side, even the spare.  And lastly, the 4 main wheels are the same but the front axle has a smaller size nub at the end, making the front wheels much harder to get lined up equally.

The cab builds up neatly and does have some good detail but no foot pedals.  The POW can holders are a little chunky but the Enfield rifles are very nicely done.  The bed is mostly one piece that you add to.  It depicts a radio truck much like the Tamiya kit does in 1/35th scale.  There is decent exterior detail again, but no provision for showing the radio open and no detail on the inner walls.  I also drilled out the holes in the tailgate for a little more realism.  The Lewis gun is beautiful but oddly mounted horizontally on the pintle.  Would have loved to see at least a Vickers Machine Gun for the bed and maybe a couple Vickers K guns.  Maybe these will be in a later release.

One other thing where Dragon seems to have missed the boat is the extra gear that these trucks normally carried on their missions.  Pictures always show them packed to the gills.  The kit includes a spare tire, one flimsy, and a box – and the last 2 items have moldings on the floor to position them.  They could have at least included some bail-out kits hanging by the cab and rear.  I am sure the aftermarket dealers will help fill this void but it would have been nice to see a little more in the box.

The build went pretty easy, even with my fat fingers, and I had the chassis, cab, and bed assembled and ready for paint in very little time.  I used Tamiya Light Sand TS-46 in a rattle can and finished the main assembly.  One area to watch out for is the front bumper.  The instructions show this attached to the chassis and then the cab added.  I couldn’t get this to fit that way so I glued it directly to the front of the cab after it had been glued to the chassis.  The only other issue I ran into was I attached the front axle wrong, which gave a definite shift to the wheels when attached.  I was able to reposition the axle for a better fit and still am not sure how I got it off center the first time.

The decals went on with no fuss over a coat of Future, and a little Testors Dullcote sealed them on.  There are 11 decals for this version and they are extremely small, so just be careful.

The last thing I did was add the Sand Mats to the front fenders, the rifles to the cab, and the Lewis gun (slightly modified to point to the rear) to the bed.  The final product does look like the pictures I have seen, and with a bit more stowage and a camo net, maybe another gun or two, will look good on the shelf or in a diorama.

I would like to thank Dragon USA for the sample and IPMS/USA for the review opportunity.

What's wrong with this picture?