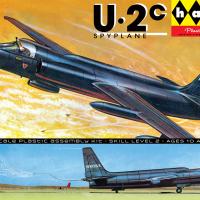 The Lockheed U-2, nicknamed "Dragon Lady", is operated by the United States Air Force (USAF), National Aeronautics and Space Administration (NASA), the United States Navy, The Republic of China (Taiwan) Air Force and previously flown by the Central Intelligence Agency (CIA). It provides day and night, high-altitude (70,000 feet; 21,000 m), all-weather intelligence gathering. The U-2 has also been used for electronic sensor research, satellite calibration, and communications purposes, has been modified into the TR-1 (since redesignated U-2S) and ER-1 (NASA). The type was successfully adapted for operations on aircraft carriers (U-2G) , but the type was never officially operated from carriers.

In 1960, the U-2 came into the public spotlight when Gary Powers was shot down in a CIA U-2A over the Soviet Union by a S-75 Dvina surface-to-air missile (SA-2 Guideline). The US Government initially denied the reports, then said it was a weather flight that went off course, but when the Soviets had Eisenhower trapped in by lies, they produced the pilot still alive. The controversy that ensued saw the type being removed from Turkey and Japan resulting in a degradation of US spy capabilities.

The U-2 has served the USAF for over 50 years. The current model, the U-2S, received its most recent technical upgrade in 2012, and even now Lockheed has proposed an optional-manned version to allow the type to be either flown by men or operated as drones. The U-2 design might well be serving with the USAF 50 years from now.

The Lockheed U-2 was first kitted by Hawk Models in the early 1960s as the original U-2A. At some point in the mid 60s, the mold was converted to a U-2C with the larger intakes and dorsal hump. (this is the mold this kit uses). In the 1980s, Testors acquired the molds and made new molds to make the later family members.

As a kit from the early 60s, there is almost no cockpit details to be had: and instrument panel and a "pilot on a pole" to fill the hole. This lack of cockpit has always led me to build this particular model with the canopy closed, as once the white shield is painted on the inside there won't be much seen anyways.

An interesting option for the kit is the addition of mission pods for the wings and the inclusion of a ground handling dolly. The dolly makes displaying the kit a little easier as one does no have to rely on the pogo outriggers.

This mold, from the mid 60s, is really starting to show it's age. When I compared it to a Testors kit, the amount of flash was considerably higher. The intakes in particular are nearly flashed over at the rear ends. Flash is not a hard problem to deal with, and cleaning the kit up took about half an hour, all told.

Another issue with the kit is the amount of warping found in the wing halves. When I started test fitting, I found the wingtips had 7/8" of air between them. I really hoped this would add the proper droop, but the end result was extra dihedral, not anhedral, on the structures. A little weight on the wingtips left outside in the hot Florida sun for half a day solved this issue.

The rest of the kit went together as usual. The raised panel lines was something I decided to remove before assembly as I knew (from previous builds) heavy sanding would be required to flush the intakes.

One disadvantage with building the canopy closed is that there is no option of closed wheel wells short of "major surgery" as defined in the contest rules. I chose to build the kit per the instructions.

Overall, the kit is very easy to build with moderate cleanup and is fit for building by anybody with basic skills. The lack of tiny and intricate details really speeds up the build.

The decal options give the builder a choice of three finishes: Classic black, NASA white or a two-tone gray scheme. I chose to go with the overall black, as the decals include markings for N803X, a plane Gary Powers was known to have flown and the background subject in a very famous photos of Powers and Kelly Johnson.

The decal sheet is sparse, but then again so were the markings on the U-2, and is printed by Cartograf. The markings apply very easily and they include camera ports for the non-black versions.

Markings are included for:

I want to thank Round 2 Models for re-releasing this kit and to the IPMS USA for allowing me to build and review it.