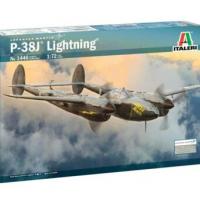 The Lockheed P-38J was one of the finest twin engine fighters to be developed during World War II, and although it wasn’t as effective in the European Theater, it excelled in the Pacific, where some of the highest scoring aces scored the majority of their victories on the type. Although faced with developmental problems, it became a highly effective, well armed, and long ranged fighter with excellent overall performance. It was especially effective against the Japanese, and one little known achievement was that Charles Lindbergh, who had been rejected by President Roosevelt for political reasons, went to the South Pacific to work with pilots extending the range through improved piloting techniques, actually scored a victory against a Japanese plane in a 475th FG P-38 . He was the only American civilian to do so during World War II.

The P-38J was one of the late production models, featuring reliable long range performance and heavy armament. In addition to four .50 cal. Machine guns and a 20 mm cannon, the P-38 could carry bombs or ‘bazooka” type rocket launchers. In addition, a photo-reconnaissance version, designated F-5, was used, and several of the war surplus F-5G’s were used in the National Air Races in the postwar period. Others were used for high altitude photography. They were withdrawn from military service shortly after the end of the war, although a few were exported to foreign countries.

Since the P-38 was a well publicized fighter, there is plenty of material available showing photos, drawings, and other technical data on the airplane. One of the better sources is the series of three softcover books published by Squadron Signal, the P-38 Lightning In Action series. Other coverage is available in Swanborough and Bowers’ United States Military Aircraft Since 1908 and the many other books dealing with American warplanes. There are also numerous after-market decal sheets which provide additional choices as to markings and other details.

The 12 page instruction sheet provides a short one-paragraph history of the type in six languages, numerous legal warnings, a very useful sprue diagram, 12 exploded assembly drawings, four color four-view drawings showing the colors and markings for the versions for which decals are provided, and a page at the back to write to the company in case parts are broken or missing.

The assembly drawings are particularly good for this kind of kit, although there are several issues, such as the rear boarding ladder, and the 12 piece propellers, that are a little confusing. The four view drawings, however, include separate views of the cockpit nose area, showing the markings that are obscured by the engines.

The kit is a reissue of the earlier Academy kit, #2209, and from looking at reviews of that kit, there is no difference between the kits. A review of the Academy kit is accurate for the Italeri kit. But this is OK, since the academy kit was basically as good a kit as we are going to get. Molded in soft grey styrene, the kit has very little flash, and although some of the parts are very small and have a tendency to escape into the carpeting, fit well together and require very little filler overall. Although there is no pilot figure , all of the rest of the parts are there, and the kit almost snaps together. One thing I noticed about this kit was that it is very robust, and when the wings, fuselages, and tail units are attached, the structure is very strong and there isn’t any tendency for anything to break, although when the instructions say to install the landing gear, struts, and wheels before installing the wheel wells in the twin fuselages, you might think about that, as these parts are easy to break off, and I found that they can be installed after major assembly with very little trouble.

I only had two problems assembling this kit. First, I loaded the nose with weights, but apparently didn’t get enough in, even though I filled up the empty spaces, and the airplane still sits tail down. I should have added some weights to the engine compartments before I joined the sections, as you can’t do this after the fuselage halves are joined. Second, the propellers are molded in six pieces each, and the assembly is very touchy. They could have easily been molded in one piece, and you have to be careful, as the props are handed, rotating in opposite directions to lessen the effect of torque and “P” factor for takeoffs and landings. Anyone who has ever flown a tail wheel airplanes can tell you why this was a real advantage in operating this type of airplane. The tricycle was also a significant safety factor, and this was more common on American warplanes than those of any other country during World War II.

I used Tamiya acrylic paints for this aircraft, and was basically satisfied, although I thought that their Olive Drab was a bit darker than it should have been. The model looks OK, however. I didn’t do any weathering.

The only detailing that is required is the addition of the elevator balances and the pitot tube and antenna up front. Two short lengths of fine wire will serve as the low frequency radio antenna, which runs from the rear portion of the pilot’s fuselage to the leading edges of the vertical stabilizers. I used straightened out electrical wire and white glue, and these wires were about the only thing I added to the kit.

This is probably one of the best P-38 kits available in 1/72 scale, and structurally, I think it is better than the others I’ve seen. The only real drawbacks are the multi-piece propellers, which are extremely difficult to line up correctly. You just about have to make up a jig to get it right. But the decals are good, and the choices you have using kit decals cover the basic color schemes used by late war P-38’s. If you are planning to build more P-38’s, this would be the one to get. Of course, if you opt for the Academy kit, you’re getting basically the same thing. In either case, they are worth getting. Highly recommended.

Thanks to Italeri, MRC Academy and Phil Peterson for the review kit.