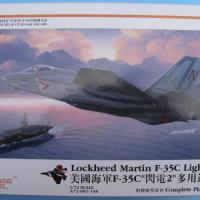 This kit was my first experience with a product from Orange Model, and to my knowledge, this was the first kit that they introduced, at least it was the first one that I noticed. This was actually a fun kit to build, as the engineering was on par with some of the manufacturers known for kits that are nearly flawless to assemble. The plane itself built up with very few issues, the tow tractor that was included provided some challenges with the small parts, and photoetched items, and the photoetch tie downs require the most experience to complete. If you are interested in adding a 1/72 scale copy of the US Navy’s newest jet to your collection, this is currently the only one available, and it is a great kit.

As I had the privilege of reviewing the F-35C in 1/48 scale produced by Kitty Hawk, some of this information may look familiar. The C-variant is the last release of the F-35 series following the A-variant that will be flown by the US Air Force and foreign nations purchasing a land-based plane, and the B-model, meant for Short Take-Off and Vertical Landing (STOVL) capabilities required by the US Marine Corps and a few other nations. The F-35C is the navalized version of the plane, which has stronger landing gear, longer wings with hinged tips (for storage onboard aircraft carriers), a tailhook, and the largest internal fuel stores of the three versions. If you follow any articles about the F-35, you already know that it is one of the most controversial aircraft ever produced for the United States, and some initial foreign interests have dried up due to early production issues.

The F-35C itself is 51.5 feet long, with a wingspan of 43 feet (8 feet longer than the A and B models), the empty weight is 34,800 pounds with an internal fuel supply of 19,600 pounds. The advertised range is 1400 nautical miles, or a combat radius of 640 nautical miles. The plane is part of the “fifth generation” of jet aircraft, and is the first Navy jet to incorporate “low observable” or “stealth” technology.

Upon opening the box for this kit, you will find 98 medium gray metallic plastic parts spread across eight sprues, and a single sprue that holds four clear parts that are smoke gray. I found the plastic to be brittle, so be cautious when removing the parts from the sprue; there are also some heavy attachment points for some of the parts. Three photo etch frets are also included with one being dedicated to the plane, one to the tow tractor, and the final one for the aircraft tie-downs. There is also a steel rod for the tow tractor and a piece of copper wire for use on the tie downs. The directions are contained in a 16-page manual that is printed in black and white, and the final two pages contain a history of the aircraft from Wikipedia. A separate folded sheet contains the color and marking information for three different aircraft as well as the tow tractor. Decals are provided on two sheets, one with color items for the VFA-101 aircraft and missile markings, the other in gray for the stencil markings of all three planes as well as the specific markings for the test aircraft CF-03 and CF-05.

As is typical with most aircraft kits, construction begins with the cockpit then work through assembling the landing gear bays and installing them in the lower fuselage of the plane. I opted to leave the landing gear themselves off until I had painted the exterior of the plane, and this did not cause any assembly issues. I read a review of this kit in a magazine where the author had a problem with the front wheel bay and cockpit joint causing a gap with the fuselage halves. I made certain that the bottom of the control panel (part E6) sat just past the raised lip of the cockpit tub for the control pedals (toward the ejection seat, and away from the pedals), and I had no fit issues with the fuselage halves. As VFA-101 is a training squadron, I elected to leave off the weapons pylons as well as the four included missiles. I also wanted to display my model with the wings folded, but a dry fit made it appear that there would be no issues with building the wings in the down position. I was thoroughly impressed with the fit of the parts on the plane, which made this a fun kit to build.

The SD-2 tow tractor is being included in the initial production run, and is a great addition to the kit. The engineering was also very good on this item, but some experience will be beneficial as the metal bar in my sample as a little short, and during construction you need to align the two tow bars (H3 and H4) and a center piece (PE part C3) between the interior sides (H14 and H15). It is also a little challenging to get the three points of contact between PE parts C4 and rounded part C6 correct, but patience will prevail. Although they would be small, there are no markings included for the tow tractor.

By far, the most challenging part of this kit is the included aircraft tie downs, which are a unique item indeed. Each tie down consists of fifteen pieces, two of which are pieces of included copper wire that need to be trimmed to size. In the magazine review that I read of this kit, the author specifically stated that he did not want to attempt building these items. I elected to build one for this review in order to prove that they can be built, and in doing so, I discovered that they do look nice once completed. I decided to leave off the paint for now in order to better show the parts as they exist when first assembled.

The paint scheme of the F-35 can be very daunting, as the majority of the photos show a dark grey plane with light grey leading edges on just about everything that can or might move. I found the site http://www.cybermodeler.com/aircraft/f-35/f-35c_profile01.shtml early in my research, and it shows a solid grey plane that it refers to as being FS 36170. They reference Humbrol 92 as being a match for this, and as luck would have it, I was able to obtain some for this project. As a side note, one tin is more than adequate for what you will need. The site that I reference states that the markings on the plane are in FS 36375, but I found them to be much darker on the decal sheet, and they all but disappeared once installed. Aside from the Humbrol 92 enamel, I used Model Master Acryl Gloss White, Interior Black, and Insignia Yellow. I also used Vallejo Dark Rubber and Flat Black; Model Master Metalizer Burnt Metal, and Tamiya Clear Green and Clear Red. I used Alclad II Gloss Kote to seal the paint before adding decals, and then used their Light Sheen for the final finish. As a side note, Orange Model does produce a masking set (OGHA 72002), if you want to add the paint on the panel edges.

Regarding my hits for this kit, as I mentioned, this is the only currently available release of the F-35C in 1/72 scale. Orange Model does a nice job with the level of detail in the moldings, and there was minimal flash to clean up. The decals settled well using only Micro Set, but I still give them a coat of Micro Sol out of habit. Markings are provided for three different aircraft from the first F-35C to one used by VFA-101 in the training of future Naval Aviators. The weapons provided are another hit with two AIM-9X and two AIM-120 missiles being included as well as a centerline fuel tank. The photo-etched parts that are included are well made, and the seat belt looks good once installed. The fit of the parts is exceptional, and you may even be tempted not to glue some of the items. I also appreciated the smoked glass for the canopy, as it more clearly represents the real plane.

As far as my misses are concerned, the painting directions are both vague and incorrect. Vague in that the plane color is called “Dark Grey” and the missiles are “Light Gray” and “Dark Grey”. They are incorrect in calling the tow tractor and landing gear/wheel and weapons bays “Flat White”. The decals that are meant to be light gray, should be FS 36375 in color, but are darker, and further examination under strong magnification revealed that mine had pixels set too far apart, which made the “No Step” stencils unreadable. I would recommend an aftermarket set of decals if you really must have those markings.

In conclusion, I would still highly recommend this F-35C kit to any enthusiast wanting to add the next phase of Naval Aviation to their collection. In 1/72 scale, the plane is slightly larger than an F-16 (or slightly smaller than and F/A-18C), so it is not a big commitment to display shelf space, and this is currently the only C-variant on the market in this scale. Although the F-35C itself went together easily, I would suggest that modelers have a few kits under their belt before taking on this build due to the challenges of the tow tractor and the complexity of the tie downs.