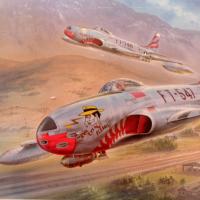 The first jet airplane I ever saw was in 1948 at the opening ceremonies of Idlewild Airport (now J.F.K.). I was only five years old and while most there covered their ears, I just ate up the sound of jet noise. I never got over it. In the over 60 years, I have been building models, I never got around to building a P/F-80 until now.

The kit I am reviewing is the Special Hobby F-80C in 1/32 scale. Upon opening the box, one is impressed with the size of this aircraft. It is molded in light grey plastic on some very heavy sprues. The molding is nice and crisp with recessed panel lines. The canopy parts are in a separate bag for protection and are just beautiful.

This kit contains a lot of resin parts, such as two separate styles of wheels, bombs, a beautiful cockpit tub, and a terrific seat. I think this cockpit is a work of art with some of the best photo etched instruments I have ever seen. The only fault I could find is that the seat sits too low. This can be corrected by putting a shim under it.

The instructions leave a lot to be desired, as there are several questionable steps and placement of parts. I found that the intake ducting to be totally unfathomable, so I cut them short and used only the front part. Actually, the back part cannot be seen anyway. Before gluing the fuselage halves together, I put the front wheel well and cockpit in, and the fit was perfect. I also added a ton of weight to the nose, necessary to prevent tail sitting. The intakes on the fuselage sides have a very poor fit and needed a lot of filler to look right.

A note of caution is needed when installing the landing gear. With all the weight in the nose, the kit landing gear is very stressed. I would recommend using the SAC metal gear struts. I used the kit gear, which is beautiful, and prayed that it wouldn’t collapse. Next one will have the SAC gear.

After all the components were in place, I primed the entire aircraft with Duplicolor dark grey automotive primer. Over this I sprayed the model with Tamiya AS-12 Bare Metal Silver right out of the can. I really liked the way it looked so I didn’t mess with any panel shading. The Tamiya paint is a lacquer so it dried like right now.

After the painting, I added the landing gear (the instructions were very poor on this point). I dipped the canopy in Future and attached it with the same. Next came the decals. There are two huge sheets of decals for this kit. They are super thin and come off the backing paper in about 30 seconds, so be careful when working with them as they have a tendency to curl.

I really enjoyed building this kit, but I would recommend it to modelers with a few builds under their belt due to the poor fit on some of the parts. As I said, the cockpit alone is almost worth the cost of the kit. At this price, it’s not a steal, but it is reasonable. I am not sure if this is a new release or not, but it is the exact same as the Czech Model F-80C sold by Squadron, even down to the same instructions. The only difference is the decals supplied. Overall, I would recommend this kit, as it looks great when finished.

I wish to thank Special Hobby MPM for supplying the kit, and Steve Collins of IPMS-USA for sending me this kit to review.