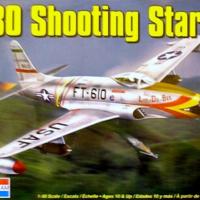 Yet another classic design from Kelly Johnson, the Lockheed F-80 was America’s first practical, jet powered fighter. I say practical because the real “first U.S. jet was the Bell P-59 which was really a transition trainer for new jet pilots, not a viable combat aircraft. The first “Shooting Star,” was produced in 141 days and flew on Jan 8, 1944. Teething issues included fuel consumption levels higher than anticipated (a common problem of early jet engines) which required hanging extra tanks under the wings. Armed with 6x 50 cal. machine guns and a stable flight profile, the F-80 proved its worth in the Korean conflict primarily as a ground support aircraft.

Another distinction the F-80 claims is as the mount of the first jet powered USAF aerobatic team. Formed in 1948, the Acrojets consisted of fighter school instructors based at Williams AFB in Arizona. This team created several of the signature maneuvers still used by the USAF Thunderbirds including the bomb-burst and the multidirectional opposing pass. On a somber note it was in a P-80 that Americas “ace of aces,” Richard Ira Bong lost his life after his engine failed after takeoff from Burbank airport in California.

This is a reissue of the Monogram kit first offered in 1977. If you built any of Monograms offerings back then, this will all look very familiar to you. Raised panel lines aside these kits still stand up against contemporary offerings. Oh wait! There are no current or past offering of this aircraft in 1/48 scale. Luckily, none are needed as this kit has a lot of cool features including dropped flaps, gun bay details and a break away fuselage with an engine inside. Decals are offered for two versions. The first is a colorful F-80 piloted by Oliver Cellini with the 25th FIS, 51st FIW and the second is an Acrojets aircraft. Considering the age of the molds, this kit has stood the test of time. I found minimal flash or flaws in the castings.

Construction was very straight forward. A few areas you’ll need to pay attention to include, weighting down the nose if you don’t want the clear peg (provided in the kit) to ruin the scale effect and gluing the wing tops halves to the fuselage to minimize fooling with panel line repairs later. The only gripes I have with this and several other Monogram kits I’ve built recently are the company logo/trademark cast on the exterior of the model surface and the sprue attachment points on the clear parts. As it turns out, I had some putty work around the engine intakes so removing both was just part of that process. You need to test fit the engine or reinforce the fuselage top seam. The tight fit popped that joint open when I installed the engine after painting so be warned. It also appeared that if you wanted to close the fuselage, a bit of work was needed to align everything. I choose to leave mine open so you can see what’s inside.

As stated prior, the kit provides two marking options both of which are natural metal. Both options require painting the nose a matching color to blend in the decals but it’s not beyond most modelers. I used gloss black as a primer/undercoat for alclad aluminum. A section on the nose was masked off to match the black decal it would receive later. The landing gear, speed brake wells and flap opening were brush painted zinc chromate.

I choose to finish this F-80 with the Acrojets markings. No clear coat was used since alclad leaves a nice glossy smooth surface for decals. As for the decals, Monogram has come a long way from a few years ago. I found the decals went on easily and laid over the surface details with little to no setting solution. The only fix was the antiglare panel decal that is too glossy. I applied the decal and used it as a guide to over paint with olive drab. The Acrojets aircraft had two guns removed and fared over but I choose to install what comes with the kit and to open the access door so you can see inside. As with most display teams, these aircraft were kept in top condition so weathering was not applied.

I built most of the Monogram lineup back in its heyday but this is one I missed. The thing that always impresses me is the level of care that went into creating these kits. The skill level indicated on the box is accurate. I would have to give this kit a ten out of ten as there are no other contenders in this scale. Thanks as always to Monogram/Revell for the review sample and to IMPS for letting me play with……I mean build it for you.