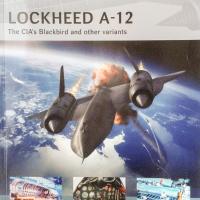 The story of the Lockheed A-12 began with a bright orange fireball 70,000 feet over Sverdlovsk in the Soviet Union. This explosion, 1500 miles deep into Russian territory, would start a diplomatic crisis with repercussions that directly impacted the A-12 and SR-71 operations for the rest of their service lives. That explosion severed the tail from a Lockheed U-2 reconnaissance aircraft and sent the pilot, Francis Gary Powers, plummeting into the hands of the Soviet authorities. After the U.S. broadcasted a cover story assuming Powers had died, the Soviets revealed they had parts of the plane and Powers in their custody. This caused then U.S. President Eisenhower to do two things, stop all over flights and find a way to make the U-2 invisible to radar. While some efforts where made to reduce the U-2 radar signature, it was just not possible to cloak a jet-powered glider with long straight wings. Enter Lockheed’s Kelly Johnson. Known for designing the P-38 fighter plane, the F-104 and the U-2, Johnson realized the best solution would be an aircraft that could fly higher and faster then anything else. A small radar cross section (RCS) was never his priority, a factor (as you’ll read in this book) that almost cost Lockheed the contract. In the end Johnson was proved correct. The A-12 and its successors were not true stealth aircraft, but the logic of being the highest and fastest was proven to be a valid concept.

This is book 12 in the Osprey Air Vanguard series. True to the title, it focuses on the development of the A-12, M-21/D-21 and the YF-12 interceptor. The book is broken down into four main sections, Design and Development, Technical Specifications, A-12 Projects and Variants, and Operational History. Other books, including the author’s own definitive work on the SR-71, Lockheed SR-71: The Secret Mission Exposed, have covered most of the developmental and technical issues. I knew a lot of what was covered there already. The operational history section was the most interesting to me. These were the early CIA operations flown over North Vietnam and North Korea. Two digitally rendered color plates by Adam Tooby depict the October 28, 1967 and January 4, 1968 missions over North Vietnam during which SA-2 missiles were launched at the overflying A-12s. A small piece of shrapnel lodged in the bottom wing filet on the October 28th mission would be the closest anyone ever came to shooting down a Blackbird. It’s interesting to note that, as much as the U.S. government didn’t want to risk the overflying of enemy territory, the intelligence gathered was so valuable that until satellites could match the capability of these amazing aircraft, they were kept operational. I had the pleasure of seeing one of these amazing machines fly before it was retired. I don’t recall the year, but the location was Edwards AFB at what used to be an annual open house. Although the aircraft was an SR-71, the effect was the same. Watching it take off, perform several low passes and then create a sonic boom from altitude before landing was real goose bump moment.

As a model resource book, there are valuable references including color three views of the variants discussed. Period photographs, some never before published, reveal internal components and construction details. If you are building an A-12, or considering converting an SR-71 to an A-12, this book would prove very helpful. A quick search of the Internet reveals there are a few kits of the A-12, as well as several of the more common SR-71. I would like to thank Osprey Publishing for providing the sample and the IPMS review squad for sending it my way.