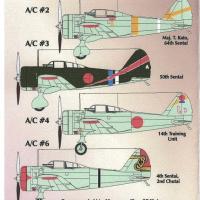 Lifelike Decals from Japan has released its 6th installment in a series of Ki-27 “Nate”. You get a total of 8 aircraft, with 5 of them being of the Japanese “Gray Green” color, which the instructions suggest to replace by the German RLM 02.

One of the other three aircraft is painted in Japanese Dark Green over Gray-Green, the next one is an attractive disruptive camouflage of dark green, green and brown over Grey-Green and the final one is an overall Gray-Green with field-applied Dark Green and Brown on a pattern of stripes and bands, which in some cases even slightly overlaps and covers the national markings.

Decals have been printed by Microscale and their have a well-earned reputation for thin decals and in-register sheets. These are no exception. Decals are glossy; they look thin and likely will adhere well to a gloss surface.

A very interesting feature of this decal set is that the instructions include references for the aircraft profiles and also a short -but very well detailed- history of each aircraft, including in some cases details on the pilot(s) that flew that plane.

This sheet is a welcome addition to the resources for a Ki-27 Nate fan.

I would like to thank Lifelike Decals and IPMS/USA for the review sample.