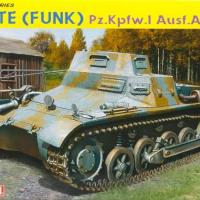 Well, being an armor builder, I decided to try the Dragon Leichte Funk Pz.Kpfw.I Ausf. A, or, as I simply call it, “The Funk Wagen”. This was the first armor kit I have ever built that doesn’t have a gun. This review should be titled, “The Good, The Bad, and The Ugly.”

The Good: For starters, it is a neat subject. It has a complete interior which allows for a nice option to have all the hatches open. It contains a nice selection of photo etch parts, especially for the grilles and certain radio parts. The interior went together perfectly. In fact, I was happy with the model in the beginning. The wheels are nice, and the etched rims are a neat touch. I can’t rave enough about the interior. It went together well and looks very nice. In fact, I am almost tempted to leave the turret off just to show how cool the inside looks. I did like how 80 percent of the kit went together. The detail on the entire kit is really nice. From underneath the tub to the smallest little part, the crispness shows. In fact, the detail was a very nice thing since older kits had nothing underneath the tank to look at. The one bad thing, though, is very rarely does anyone pick up an armor model to look underneath. There are a few problems, so let’s get to those.

The Bad: The fit, especially in the turret and glacis area, is bad. You can see the gap I am going to have to clean up to make this a nice-looking model. Magic tracks, which on a model this small are not magic at all. They are just too small and frail. I am sure on the Tiger these are a nice concept, just not on a Pz. 1. I think I bent almost every track which means aftermarket tracks for me. The running boards are intended to be attached before you add anything to them. A word of advice to those building this kit – put everything on the running boards first before attaching them to the hull! There is not much contact area holding these onto the kit, and when you try to attach the tools or exhaust pipes later on, the running boards end up snapping off, or bending. This was big mistake on my part, since I normally paint my tools separate and add them last, and I have had to re-glue the boards twice already. The photo etch for the canteens and gas masks are nice and all, but a better choice would have been to have photo etch for more of the radio parts, especially the radio tower, since the kit one is plastic and a pain to put together.

The Ugly: Well, to keep in theme here, the photo etched parts are wonderful, but there should be photo etch for the antennas. Also, the directions are hard to follow sometimes, and they are not clear on what is to be done in certain places (like where the tube comes out of the front – it really doesn’t show where that thing goes, and it is too long just to rest against the turret). The one that bugged me was where they have you drill out the holes in the running boards, and on one side all the holes are neatly laid out, but on the other side it is up to you to drill some yourself. What the directions don’t tell you is how big the holes need to be, nor how far apart they should be drilled. These measurements would have been nice. The bent antenna is plastic, and very difficult to clean up and glue together; in fact, in trying to clean it with the knife, I broke mine, and will subsequently try to make my own with wire. The clear parts that are used for the vision slits are way over the top, especially since these were metal in real life. I like the clear part where there would be glass, but having the whole assembly made from glass, clear is not cool. It will make it fun to mask and paint.

Now, despite the fit problems and my having to scratchbuild a few parts eventually, this is a nice subject, and worth a look at if you are into early German armor. Do yourself a favor, though, and take the directions as more of a guideline than a set of rules. Make sure you try everything before you glue anything! Eventually, a few months from now, when I have more time to spend on it, I am going to fix the problems and finish this kit properly because that interior is wonderful and actually worth it.

I would like to thank Dragon Models USA for the review sample and IPMS/USA for allowing me to review this kit.

Note how deep they're recessed

Tub before the interior

The Big Gap
Previous Next