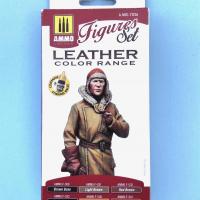 For figure builders, or anyone who builds models that might have some leather (seat covers and the like), one of the latest releases from Ammo by Mig is a six-piece leather color range set. The colors vary from dark brown to rust ochre and should satisfy all your brown leather painting needs. The paints all have a stainless-steel mixing ball already contained in the bottles to aid in mixing, and the colors can be mixed to provide the base color, shadows, highlights, and even scratches and tears. I would highly recommend this set to any modeler looking to add some brown leather to their builds.

This was my first experience with an Ammo Figures Set of paints, and I must say that it was an incredibly positive experience. For those who often use acrylic paints in 17ml containers, I would describe the consistency of the paint as being thicker than bottles intended for airbrush use, and thinner than the standard Andrea paint. The included colors are Dark Brown, Brown Base, Light Brown, Red Brown, Bright Orange, and Rust Ochre. The paints were easy to apply using a paint brush straight from the bottle, and as with most acrylic paints, were easily thinned with Distilled Water to create thinner coats for blending.

When my review set arrived, it did not take long to determine which figures to test out the paints on as I have my Revell-Germany Iron Maiden Spitfire Mk. II Aces High (kit 05688) offering in 1/32 scale that includes two figures of Eddie the Head (the band mascot). I felt that this was a good scale to try out the paints, and a new technique on as I do not have any 1/16 or larger scale figures wearing significant brown leather. As you can see, the standing figure is wearing a leather jacket and boots, while the seated figure has the heavy leather gloves and boots.

I primed the figures using an airbrush with Stynylrez Black, then applied their White primer straight down only to add highlights. The base colors were then added at a 90° angle followed by the shadow color added from below, and highlight color added from above, all performed with an airbrush. I used Panzer Putty to mask the areas that were not to receive the colors being painted. This whole process took me less than an hour, far faster than if I applied everything with a paintbrush. The uniform colors and life jackets were painted with Ammo by Mig Figure Set RAF WWII Pilot (set 7026).

Once the airbrushing was completed, I used a mix of Vallejo colors to create the “skin” tones for Eddie as well as Tamiya Brown Panel Line Wash for the recesses before adding the final highlights with a paintbrush. As I mentioned, the paints applied well with a paintbrush, and I thinned the colors at a ratio of about 60% paint to 40% thinner (using my available Vallejo thinner) when airbrushing.

As far as my hits are concerned, the paint worked beautifully using both a paintbrush straight from the bottle and airbrush. The included colors for the set allow replicating leather ranging from deep to light brown, as well as slightly orange and red shades (the figure on the box shows a WWI Pilot with an orange shade on the leather helmet as an example) and even scratches or tears. While not really important, my only miss would be the colors used on the box to represent the included paints as the Brown Base and Dark Brown look identical, and the Rust Ochre is definitely a lighter paint than depicted. This would only be a potential problem if buying the set just based on the boxing.

In conclusion, I highly recommend this paint set to any modeler that wants to better represent brown leather on a project. Whether that be a figure, a motorcycle seat or saddlebags, or the padding around the cockpit of a WWI aircraft, this set will make the leather stand out. The paints apply well using a paintbrush directly from the bottle and will airbrush well at about a 60/40 mix with an acrylic paint thinner.

I would like to thank the folks at Ammo by Mig Jimenez for being gracious enough to provide this Figures Set to the IPMS-USA for review! Thanks to Phil Peterson for running the Review Corps along with our Postmaster Bill, and the other folks behind the scenes publishing the reviews. Finally, my sincere appreciation to all who take the time to read this.