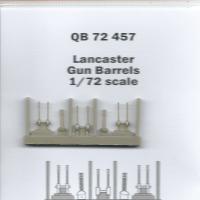 The twin-engine Avro Manchester was used heavily during the first months of World War II. However, it was underpowered and not very reliable, and it fell short of the RAF’s expectation. The Avro engineers got busy and replaced the Manchester’s two 24-cylinder X-block Vultures with four V-12 Rolls-Royce Merlin engines. To accommodate the two extra engines, the Manchester’s wing span was increased. In turn, this caused problems with the airframe, so they enlarged the fuselage and redesigned the tail. Thus was born the Lancaster. It became an instant success, even though its defensive armament was somewhat light, consisting of eight .303 Browning machine guns.

Quickboost has released a direct replacement set of guns for the 1/72 Airfix Lancaster bomber. The last I looked, Airfix currently has three Lancaster bombers: the B.I(F.E.)/B.III (kit #A08013), the B.II (A08001), and the B.III The Dambusters (A09007). The Quickboost gun set contains enough guns to fit each variant. For the purposes of this review, I’ve used the Lancaster B.II, a variant fitted with four Bristol Hercules radial engines. This particular Lancaster carried two guns in a nose turret, two guns in a mid-upper turret, and four guns in a tail turret.

The parts are cast in a light gray resin on a single mold block. The castings of the .303 guns are beautifully done with no flashing or pitting. The detail is superb, depicting the flash suppressors, cooling vents, and hollowed barrel ends. The gun barrels are attached to the pour block with a minimum of material. They can easily be removed and cleaned with a razor saw or sharp X-Acto blade. They are small and very delicate, so care should be given in their removal. The only instructions provided in the package concern which resin parts replace which kit parts.

In summary, the set of Quickboost barrels with their crispness and flared hollowed ends will enhance the look of the Airfix Lancaster kits. People tend to notice a bomber’s defensive armament, so there is no doubt that these resin parts will really stand out. It’s easy for me to give this set two thumbs up.

Thanks to Aires Hobby Models for providing this review item and to IPMS/USA for letting me review it.