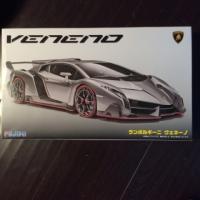 2013 marked the 50th anniversary of the Lamborghini automotive company. An anniversary as significant as this could not pass without Lamborghini celebrating it with what else but a new version of the magnificent cars they have produced for 50 years. The Veneno (named after a famous fighting bull as all Lambos are) is that car. Based on the Aventador LP700-4, this car has a redesigned body and increased horsepower from its L535 6.5 liter V-12 engine. This engine makes 740 hp and can propel this car to 220 mph. The body is constructed largely of carbon fiber with aluminum sub-frames in the front and back. Suspension is provided by pushrods with horizontal springs like a formula car that is essentially what the Veneno is. Only three production models were built, each in the colors of the Italian flag: White, Red and Green. Of the three constructed, two were granted to buyers in the US. I say granted because Lamborghini hand picked the people that would get one of these cars at a selling price of 4 million dollars each. The color scheme shown on the box art was the forth demo car. That car was revealed at the 2013 Geneva Auto Show.

There are 13 sprues of parts molded in white, black, clear and chrome. Typical of this brand, the parts are all of the highest quality. The tires are rubber without any seams on the tread. Instructions are on a single fold out sheet and a separate sheet has painting instructions with a color chart and decal diagram. This is a curbside model so you only get the top of the engine compartment molded in a single piece that works just fine. The sprue attachments have been located in a way that doesn’t mar the parts finish. There are some ejection pin marks in places they might be seen but nothing I felt compelled to remove. A decal sheet provides all the stripes for the tires and body shown on the box top as well as details and markings for interior and exterior of the car.

We start with the stoppers, that is the rotors and brakes. These have enough detail to show through the wheel spokes. The rear wheels have boxed in wells molded in black so no paint is needed. The interior is next and includes some nice racing seats and a center console. Details are provided by decals and paint. Since the interior is largely black of different sheens, I used flat and semi gloss varnish to vary the look. The seat buckets are painted on the real car so I did mine to match the body color. There are no seatbelts provided. The only issue I had was the instrument panel decal came apart when I tried to press it into the dash. I managed to piece it together. Also, the small detail decals didn’t want to stick. This caused me some concern because of the decals yet to come. The body was next. The windshield insert comes with yellow tape masks because the inside has black boarders common on auto glass these days. Be warned, the masks are not precut. You have to do that with a sharp hobby knife. I elected to pre-paint the body parts before assembly because some of the parts, especially the front fenders stand off the body and I was concerned about paint not getting into the crevices. In retrospect, I would glue the front fenders on before paint to ensure a tight joint. As it turned out, I ended up with some visible glue in those joints I couldn’t fix with major effort. There are some weird shapes on this car and the instructions are not super clear as to how some of the parts are oriented. Luckily, there are a lot of pictures of these cars on the web to save you. Part fit is very good but you have to be very careful gluing because some of the attachment points are very small.

In a first for me, I decided not to follow the painting instructions in the kit. When I saw the exotic shapes and angles on this car, I knew the paint job had to be as wild as the car it was going on. I wanted a satin finish as I’ve seen that on a number of cars here in So Cal and thought this car was begging for it. I’ve used the Testors line of rattle cans lacquers in the past and knew the finish is satin if it’s not clear coated. The craziest color I found was Sunrise Red Pearl. It turned out to have just the finish I wanted. The black areas of this car are largely carbon fiber. I used Tamiya semi gloss black for all exposed body parts. There are a number of aftermarket details including carbon fiber decals in the link below. I used the wheels in their molded black color and painted the ventilation rings to match the body. The real car has a lot of stripes on the lower body edges. I elected not use them but I did use the tire stripes and found they worked well in spite of the issues I had in the interior.

This project turned out to be a bit more difficult then I anticipated. You need to study the instructions very carefully to fully understand how all the parts fit together. Even then, I needed help from the web to figure certain areas out from photos. As the build progresses, you have to be more and more cautious because the small attachment points are subject to pop when you push to fit the next part on. I ended up with some visible glue joints because of that. I would advise gluing as many body assemblies together before painting to get the best grip from the glue. Fujimi recommends this kit for modelers 10 and up. A 10 year old with previous experience would find this kit a challenge. This is an ambitious effort by Fujmi. This car is full of difficult shapes and they’ve all been captured beautifully. I would rate this a 9 out of 10 because of the decals brittleness. There are no other options if you want a Veneno unless you can convince one of three owners out there to part with theirs. Bring your wallet, I’m sure you’d pay a lot more then the original 4 million! Thanks to Fujimi for producing another great exotic car kit and to IPMS for letting me build it.