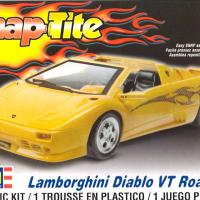 Looking at the Box

Austin (age 7): I think the kit looks pretty neat and stuff, awesome. I like the pictures on the sides. It was made in 2011 by Revell Snaptite.

Rob (actual age 53, behavioral age debatable) : The box is 9.5 x 6.75 x 4.5 inches and is lavishly illustrated. The Diablo is described as “a wild and fast mid-engine exotic sports car with four-wheel drive.” I wince at the thought of working on a 5.7 liter engine with 48 valves. I guess if you can afford one of these cars, you can afford a mechanic and the insurance.

Austin: The plastic cover thingee was easy to take off. The lid was easy to take off. The tires are black and are rubber, I think. They were loose in the box. There are bodies and other things like blinkers that are red but most of the parts are yellow in a bag. Seats and a steering wheel and a body bottom part are in a bag, all of these parts are black. There are silver wheels in a bag. The windshield looks pretty very clear. There are metal rods to hold the wheels together, I think, and three screws. The decals are peel-off kinds, with burning flames and a license plate with “Diablo” on it. There are three stickers that look like cockroaches [Rob: this is a reference to the Lamborghini logo] and there are some of those stickers that tell you how fast you are going too. Two stickers are red rectangles; there are gold rectangles that might be blinkers too. The instructions have 11 steps and the back of the instructions shows were you put the stickers. I think the instructions are a little hard to look at.

Rob: Well-packaged with most everything in plastic bags.

Austin: The instructions are OK once you start; it gets easier as you go. The parts go together well. The gear shift was tricky. Some of the parts I put in backward but I figured it out. The tires are pretty easy; I had to trim off extra stuff.

Rob: The perspective drawings in the instructions are well done, but before much of the kit took form, it was a bit tricky. I have no suggestions on improvement, though I think much of the initial difficulty was simply lack of experience. Some of the “snaps” and some of the screws were a little tough to set, and I was called in to provide appropriate torque and or pressure. Austin’s build time was about two hours, with only about 10 minutes of Rob “consulting” time. The stick-on decals were pretty unforgiving, not allowing much positioning once the sticker was dropped into place.

Austin: It was fun to finish, and I think it is awesome!

Rob: This a sweet, refreshing little project. The box cover shows a completed kit with the optional suggested paint scheme. We did not do any painting, instead preferring to get the wild and fast mid-engine exotic sports car on the hardwood “road.” This is an excellent kit for learning cognitive and spatial perception skills and the ever desired skill of “follow the directions.”

Austin and Rob: Double thanks to Danielle of Revell and the IPMS Reviewer Corps officers who make this happen! The cross-generation time that this review allowed was priceless. The ranks of IPMS will swell by at least one soon. Thanks again!