Lake Trasimene 217 BC Ambush and Annihilation of a Roman Army 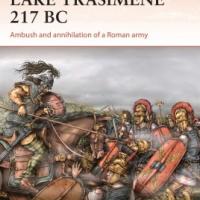 Following Hannibal's crushing victory at the battle of the Trebbia, the reeling Roman Republic sent a new army under the over-confident consul Caius Flaminius to destroy the Carthaginian invaders. Hannibal, however, was ready and waiting for Flaminius, having set a masterful ambush in the early morning mist. The tumultuous clash at Lake Trasimene firmly established Hannibal as one of the Ancient World's greatest commanders thanks to his use of innovative tactics, including the first recorded use of a turning movement. The Romans would not send another major army to confront him until the battle of Cannae in 216 BC. This new study, based on recent archaeological work on the battlefield itself, tells the full story of one of Hannibal's greatest victories with the help of maps, illustrations, and stunning colour artwork.

The first two of eight chapters covers the origins of the campaign and chronology of the campaign. Chapters three, four, and five goes over the opposing commanders, their forces and what their plan of action was. Chapter six will go over the campaign itself, from the time Hannibal comes down out of the Alps to the end of the battle of Lake Trasimene. And finally, chapters seven and eight with cover the aftermath and how it affected the Romans and the Carthaginians and what the battlefield looks like today.

The book has plenty of maps, color artwork of the battle and the opposing forces, and photos of weapons, armor, and equipment that was worn during that time period. There's a glossary in the back to provide help with the definition of the terms and titles.

The book was a bit of a challenge to read(a bit long winded) in some places and it is understandable due to all the historical background information the author puts into the book. But he does a good job in describing the way Hannibal lured the Romans into his trap and then crushed them. So if you like ancient military history or tactics, then this book is for you.

I wish to thank Osprey Publications and IPMS/USA for the opportunity to review this publication. I really enjoyed reading despite the long winded parts and hope that others will too.