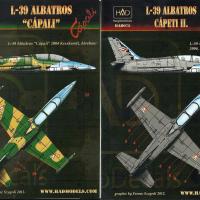 The L-39 Albatross is an advanced trainer/light attack double-seat jet aircraft of Czech design that has seen service with over two dozen air forces and several of them are currently being used in the civilian market. Avant Garde Models (AMK) has recently released the first injection model of this significant aircraft trainer in 48th scale.

“Capali” and “Capeti” are special markings used by Hungarian L-39 at the 2004 Kecskemet Airshow. The names of the airplanes correspond to the Canadian TV show “Sharky and George”, however the airplanes camouflages do not match the colorful characters of the TV Show.

Capali sports a disruptive camouflage of green and sand over light blue, with a striking Hungarian flag in the tail, while Capeti is an overall aircraft grey. Both aircraft seem to have their camouflage “peeling off” and showing a shark nose, with teeth and eyes around the nose.

You can find further details at:

The instruction sheet is printed in full color, with Gunze colors listed for the camouflage. The foldout includes a full profile (left and right) of the aircraft and it seems to be in 48th scale.

The decals were designed by HungAeroDecals and printed in Czech Republic by BOA Agency. They are glossy on the sheet; appear to be very thin, they have very little transparent carrier film around them minimizing the chances for silvering. At the same time the color density is good and they are in perfect register.

Full stencils are provided, with some of them in English and some others in Hungarian (or at least that is what I think it is). Full shark teeth and eyes are provided, as well as the “peeling off” effect of the camouflage is provided as decals. Neither templates, nor indication of the exact location for the peeling off is provided. However the centerfold drawing could be used as a template.

Please note these two sets are sold independently. I am reviewing them at the same time, due to the connection on the names and the fact that both aircraft appeared in the same airshow.

I would like to thank Had Models and IPMS/USA for the review sample.