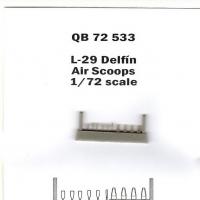 The L-29 Delfin was a jet-powered trainer airplane that was designed by the Aero Company of Czechoslovakia. An excellent kit of the Delfin has recently been released in 1/72 scale by AMK. Although this kit, in my opinion, is very good, our friends at Aires/Quickboost have found some areas where the accuracy of various parts can be improved.

This set from Quickboost provides replacement air scoops. The L-29 airplane features several small air scoops around the outside of the fuselage. The AMK kit provides four of these different scoops. They are very small, have no detail and mount flat onto the surface of the fuselage. Very light markings are provided to locate the air scoops. Quickboost provide replacements for these four different air scoops. The attached photo shows the comparison of one of the AMK air scoops and its Quickboost equivalent. Note how the Quickboost part clearly shows an opening while the kit part is somewhat of a blob. Properly cleaned up and mounted to the model, the Quickboost part will improve the final appearance of the model. The modeler must be very careful in removing and preparing these parts. They are VERY small, kind of “get lost under the finger nail” small.

In addition to the replacement for the four different air scoops provided in the AMK kit, Quickboost also have included an additional fifth exterior air scoop. It mounts low on the left side of the fuselage, behind the wings. It can be seen in photos of the L-29 but is even smaller than the other scoops.

Finally, the L-29 also features a number of NACA flush intakes. These are indicated by slight depressions in the surface of the fuselage as shown in the second attached photo. The part provided by Quickboost is to be mounted to the inside of the fuselage after the plastic in the inside of the flush intake is removed. I am not sure how realistic the final appearance will be. I have not yet worked up the courage to cut into the fuselage of my L-29 kit and it seems like the thickness of the kit fuselage would make for a really deep NACA intake. The individual modeler will have to consider whether or not to use these parts. Note, AMK also produce the L-29 kit in 1/48 scale and Quickboost provide these parts in 1/48 scale as well. All of the air scoops will really improve the appearance of the 1/48 scale kit.

As I have said before, the AMK kit of the Delfin is a good kit but these replacement parts will improve the final appearance of your model. This set should be available from any dealer who sells the Aires/Quickboost line. Recommended, just be careful of the very small parts. My thank you to Quickboost for providing this great product and to IPMS for letting me have this review.

Intake comparison - Quickboot casting on model surface, to the right of the QB part is the kit-supplied molded-in detail
Previous Next