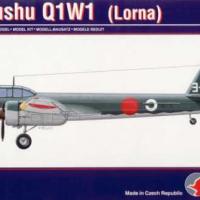 Once the Japanese Pacific "empire” had expanded to its greatest extent in mid-1942, the Navy General Staff realized that their supply lines -- basically consisting of slow, plodding “marus” usually sailing independently and not in convoy -- were extremely vulnerable to American submarines, which patrolled almost unopposed throughout the empire.

The Japanese considered the submarine mainly a weapon to be used against enemy warships. But American submarines were used primarily as commerce destroyers like the German U-Boats, and took such a toll of Japanese shipping that more and better aircraft were required for anti-submarine duties. In 1942, the Watanabe Tekkosho, later Kyushu Hokoki, was assigned the task of developing a specialized aircraft for this role. A design was quickly developed, the Q1W1, which appeared as a three-seat twin engine monoplane emphasizing endurance over speed.

The Lorna, as it was code-named by the Allies, carried primitive ASW radar, depth charges, and gun armament. It looked sort of like an undernourished JU-88. The Q1W1 entered service towards the end of 1944, too late to have any significant impact on the war, since the Japanese merchant fleet had already been decimated by American submarines and carrier-based aircraft. Only 153 were completed, and most were lost on operations because of their slow speed and lack of effective defensive armament. The few survivors were scrapped after the war, although two were taken to the U.S. aboard the USS Barnes in November, 1945. One survived until late 1946, and presumably scrapped.

Outside of the Francillon Japanese Aircraft of the Pacific War, and Thorp’s Japanese Naval Air Force Camouflage and Markings of World War II, there isn’t a lot of material available on these aircraft, although one of the Japanese publications, such as Koku Fan, may have an issue devoted to the type. Probably on-line references would have more.

This model, as evident by its low kit number, was one of Pavla’s first offerings, dating back to about 2000. Consisting of 35 plastic parts molded in soft light grey styrene, two vacuformed canopy units in case one gets messed up (easy to do on this kit), and 23 photo etched parts, the kit is basically accurate, and looks like the real airplane when completed. Decals are provided for two aircraft, one from the 901st Kokutai based at Yokosuka, and another from an unidentified unit based Formosa, now Taiwan, at the end of the war. The Taiwan based aircraft is apparently light grey, while the Yokosuka variant is in standard camouflage. There is no color information in English provided, so the Taiwan aircraft could conceivable been in brilliant orange, as the color reference for the underside of the camouflaged version is not the same as the overall color of the Taiwan plane. Most of the instructions are in Czech, but the basic illustrations are clear enough, aside from the colors.

The plastic parts are nicely done, but as to be expected in limited run kits, there is a lot of flash to be removed, and the attachment points are quite large, requiring careful removal and trimming to avoid extensive repair work. Panel lines are scribed, and on the interior, the little round projections need to be trimmed off or the parts won’t fit together, but again, this is to be expected. Some detail is a little weak, especially in the engines and wheel wells , and it will take considerable work to get everything to fit properly. The vacuformed canopies are quite transparent, although one of the cockpit canopies has some kind of projection molded on the left side, making it fairly difficult to trim if you decide to use that one. The canopy does fit, however, and all it takes is a little finesse and probably the vocabulary of a Marine Corps drill sergeant.

Assembly is pretty straightforward once all of the flash and other “extras” are removed. Quite a bit of putty will be needed to fill in the gaps, but it can be done without destroying the surface detail. Once assembled, the model can be painted. There is a LOT of photoetch material here, ranging from engine pushrod housings to radar antennas. In addition, much of the cockpit interior is photoetch, as are the flap hinges and bomb racks. These are very detailed, and will help to dress out what would normally be a very unsophisticated model.

I would suggest painting the basic airframe before attaching the outside photoetch parts. I did the Yokosuka version with the medium green over light grey, as I was sure those were the correct colors. The plane carried a strange circular marking on the fuselage side, which was supposed to look like a circle when viewed from the correct distance for anti-submarine sweeps. The photoetch parts are a little tedious to install, but nothing a competent modeler can’t handle.

This is actually a nice little kit. Challenging maybe, but since it is the only show in town, it is certainly worth the effort if you want to add a strange but interesting airplane to your collection. This is worth getting at least one. It seems to be available, as it shows up on Pavla’s website. Get one while you can.

Thanks to Pavla Models for the review sample.