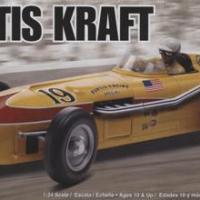 The Kurtis Kraft company built some of the first specialty race cars of the post war era. Started by Frank Kurtis in the 1930s, the company would go on to build race cars ranging from midget racers to the “big cars,” that raced the grand prix circuit which included The Indy 500. This model represents a 1955 Kurtis Kraft 500C model powered by a 255 ci Offenhauser engine producing 400hp. These cars could hit 170 mph. Nine of these cars were built. In fact, between 1950 and 1955 Kurtis Kraft cars won four of five Indy races.

This Monogram reissue is part of their selected subjects program or SSP which is basically an old kit in a new box. Not that I’m complaining since this kit came out before I was born! The stamping on the inside of the parts says “Revell Inc 1956,” which if true is very surprising because this is not a bad kit. Oh sure it has some of the cheesy elements of kits from that era like chunky suspension parts, workable steering, hinged hood and rotating wheels but nothing that detracts from the finished project. Another first for me, the wheels are cast in the same plastic as the rest of the kit. The box says there are fifty parts though it didn’t seem like it. Two figures are included but I did not use them as they weren’t fully cast and I’m not a great figure painter. A small sheet of clear plastic is included for the windscreen. The decals look good on the sheet but I think some artistic license was taken as I could not find any reference that showed the markings in the kit on a real car.

The build is pretty simple. The body is in two halves with a very basic engine under a hinged hood. The real car hood is hinged in the center so I removed the hinges and cut off the bulges for the plastic side hinges and filled them with putty. The entire body can be assembled and finished before the suspension is installed. That simplified finishing a lot. The engine is in two parts and good for holding the exhaust manifold but not much else. The clunky steering linkage is right next to it in the engine bay so its better to treat this kit as a curbside model. I ended up with a step on the underside which took a while to level and smooth with putty and primer. For the yellow finish I decided to try the Testors two step lacquer color coat and wet look top coat. Starting with Chrysler Yellow (No 28104) I built up three coats in thin layers as recommended and let it dry a few days. I then applied the first coat of Testors wet look clear (1834M) and let it dry. I then applied the decals which is fairly easy as there are not that many. Having worked with Monogram decals in the past I was concerned about the curved surfaces and how well the decals would conform. The most difficult were the three piece nose decals and the race numbers on the rear of the body. It didn’t look good at first but a little solvaset and some patience paid off with just some very tiny wrinkles that disappeared under the clear top coats.

With the body done it was on to the suspension, wheels and details. All the chrome parts were finished with the Alclad system of chrome paint over gloss black base. The wheels were painted black and then masked so the hubs could be painted a steel shade. I opened the holes in the wheels and drilled out the exhaust pipe end. The last item is the windscreen which is cut from a small sheet of plastic over a template in the kit instructions. The template shows a small notch, which if cut out results in a hole in your windscreen. Just cut it straight and you’ll find it fits just fine.

To conclude this was a fun trip back in time before the age of watch-like precision in plastic models. Although the kit is toy-ish in some ways, you can build a nice scale looking model from it. I found the kit online and in both of my local hobby stores. I’d give this one a 7 out of 10. The level 2 rating (10 years or older) seems about right especially if you fix seems and paint. Thank you to Revell for providing the sample and to IPMS for allowing me to share it with you.