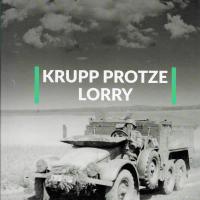 Camera On 22 Krupp Protze Lorry, is number 22 in the “Camera On” series published by MMPBooks/Stratus. The author, Alan Ranger, has written several books in this series with subjects such as “Sd. Kfz.7 Mittlerer Zugkraftwagen 7T Vol.2”, “German Horse Power”, and “The Einheits-Diesel WW2 German Trucks” and numerous others relating to WWII.

This A4 format paperback has 80 pages with period photographs from the author’s personal collection not the propaganda ones generally seen. Most are previously unseen and taken by ordinary German soldiers. The book starts with a brief forward and a short history of the Krupp Protze Lorry on two and one-half pages. The author provides in his abridged history of the Krupp Protze Lorry several facts including the number of units produced, and a summary with the different variants. The images are clear, with a few a little grainy given the age, and as the author describes are no more than 25mm by 45mm in size. The author has included captions with each image giving the reader a detailed and, in some cases, rather lengthy description of what they are viewing. The book is divided into three sections with much of the book covering the two most common variants produced, the Kfz.69 and Kfz.70. The Kfz.69 was a light prime artillery mover and the Kfz.70 used as a troop carrier.

The first section, “Krupp Protze L2H 43” contains images of the Kfz.69 and Kfz.70 variants. Both were powered with a 4-cylinder petrol engine having 50 hp. The images are printed with mostly two to a page. Even though a few are a bit grainy, most of the detail is noticeable. The author describes in detail with each image what the reader is seeing.

Page 7 is of interest as the second image on the page shows a soldier working underneath the front carriage. In the picture a very good closeup view of the steering linkage and front bumper can be seen. Page 8 depicts a L2H 43 Kfz.69 towing a Pak 36/37 anti-tank gun. The author includes images of a Kfz. 70 towing a Sd.Ah.32 small arms ammunition trailer on page 13 and a 75mm Light Infantry Howitzer towed by a Kfz. 69 as seen on page 14. Images in this section show vehicles in different environments from muddy roads to winter snow scenes. Some closeup images give the reader a view of soldier’s uniforms in very good detail as seen on page 12. For the modeler, the author includes a rare image on page 30 of a driver/mechanic caring out checks on the engine. A good detailed view of the engine compartment as well as the engine data plate under the hood can be seen.

Moving on to the next section, “Krupp Protze L2H 143”, starting with page 39 we see a 2-page spread of a L2H 143 Kfz.69 vehicle image illustrating the major differences from the older L2H 43 vehicle. The noticeable longer one-piece front bumper and larger gap between the rear tires make recognition simple. Other differences include the addition of the Krupp M304 engine instead of the M302 allowing an increase in 5 hp. Production of the L2H 143 started in 1937 and ended in 1942 Not only do you see this vehicle on page 39, but the author has included on pages 62-63 a larger two-page spread of the vehicle. On page 47 is another excellent image of a L2H 143 Kfz. 69 heavily loaded with the crew standing on the running boards. The vehicle can be seen traversing a rather muddy road. This image, as most of the images in the book, may inspire the modeler to construct his next build. The lower image on page 58 shows an interesting example of a L2H 143 Kfz. 69 which has had an incident in a ditch. One can see the damage done to the suspension. Another possible inspiration.

The author includes in this book the Sd. Kfz. 247 Ausf. A which was based upon the L2h 143 chassis. Ten units of this variant were produced and used as an armoured artillery observation and command vehicle. An excellent sample can be seen on page 80.

The author, as in previous books, presents a history of military vehicles using images all containing ordinary soldiers in their surroundings. This undoubtedly is a great resource for the historical buff as well as an excellent reference for the modeler, beginner or skilled. The author presents a plethora of inspiring ideas through images many unseen before.