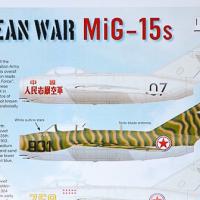 The latest 1/48 scale decal set available from Iliad Design provides markings for seven different Korean War-era MiG-15s. The instruction sheet clearly shows six aircraft, but modelers do have the option of doing a seventh (I’ll explain below). Markings are included for four (or five) natural metal and two camouflaged aircraft flown by North Korean, Chinese and Russian pilots. Note that unlike some aftermarket decal companies that provide a variety of unique markings for different aircraft but only one set of national markings, Iliad includes enough national insignias to do all of the aircraft on this sheet. This makes Iliad Design’s modest retail price a real bargain.

Iliad decals are extremely well printed and are of very high quality. Registration is crisp with vivid opaque colors that appear quite accurate. Everything is printed on a thin film that I have found will respond well to Gunze’s Mr. Mark Softer decal setting solution. There is an adequate amount of carrier film surrounding the small items, so it is advisable to apply these decals on a smooth glossy finish and use a setting solution to avoid silvering.

A double-sided, full-color instruction sheet is included that provides the modeler with a port profile of each MiG-15 (with appropriate aircraft and unit information) and overhead views of each aircraft, with under wing marking locations indicated in lightly ghosted colors.

Iliad decals can be easily sourced directly from the manufacturer at the website noted above. The website also provides a list of retailers who stock Iliad’s products.

This decal set is highly recommended. My thanks to Illiad Design for supplying the review sample and IPMS/USA for the opportunity to review it.