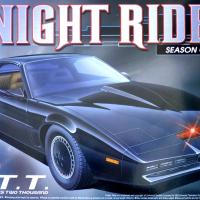 So what would be cooler than having your car talk to you, be bulletproof, and able to drive itself? Well, if you were Michael Knight, not much…and while he drove several different versions of KITT (Knight Industries Two Thousand), the original from the first season of the show was always my favorite.

I don’t build many car models, but when I do, they usually were involved in some movie or TV show. So when KITT came up for review, my hand also came up. I am not sure if this is a re-release by Aoshima of a previous kit as I remember KITT kits from years ago, but if it is a re-release, it is a good one.

The kit includes 95 plastic parts in black, tan, chrome, aluminum, clear, clear red, clear orange, and tinted black colors. There are also 4 rubber tires, 4 polyethylene caps for the wheels, and the scanning unit with 4 screws to mount it.

As this is a curbside kit with no engine, the build starts with the chassis, which goes together with no fuss and includes steerable front wheels. Then you move on to the interior. If you ever watched the show, you know that the designers just couldn’t put enough lighted switches in KITT. They are on the dashboard, steering wheel, center console, and even the overhead console. Aoshima’s suggestion is to paint each button silver and then go over it with the correct clear color. Sounds like fun, but wait – according to the instructions, you use Clear Orange for 4 of the codes and Clear Green for the other. Something just isn’t right (but it would have been much easier). There is a chart on the box top side panel that shows you use Clear Orange, Clear Green, Clear Red, Clear Blue, and Clear Yellow, but it is in Japanese. So, let me spell it out for you so you can modify your instructions to suit.

Once you get all the buttons painted and a couple decals added to the dashboard, things really pick up and the interior is finished in no time. So, on to the bodywork.
There is a one-piece body which really didn’t need any clean up, and a front end that traps the headlights (which will flip open and closed). Work in this area got a bit fiddly, especially trying to take into consideration that I wanted as much of the bodywork together as possible for the painting process. Of course, I must not have got enough of the chrome off the headlights, because they both fell off later in construction. Since I planned to display it with the lights closed, I didn’t worry about it, but if you want to be able to open them, do a thorough job cleaning your chrome.

I sprayed the completed body with Walmart-brand rattle can Gloss Black, and then it was on to the clear parts. Here I ran into my only other issues. First, the tinted black rear window has some defects where the trees attached to the part. It looks like you can see where the plastic moved through the molds. I’m not sure how else to describe it, and as it is in the piece itself, not sure you could polish it out if you tried. It is only obvious if you really look at it, so I left it alone.

My other issue was with the tinted clear part that goes over the tail lights. It was slightly warped in my kit and, as I gently tried to straighten it (that is my story and I am sticking to it), it snapped in two. I may have to see how well the parts replacement division works.

All in all, the final version looks like KITT and I have my first TV car on the shelf. What should I finish to join it? Choices run to the ’66 Batmobile, Herbie, ECTO-1, etc.

I would like to thank Dragon Models USA and IPMS/USA for providing me a kit of KITT (that just doesn’t get old).