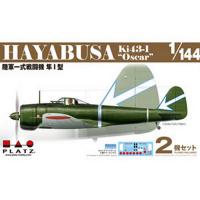 The Ki-43 has been described as the “Army Zero”. The Hayabusa and Zero were contemporaries, and the Ki-43 was quite successful in the first part of WW2. The Allies code named the aircraft “Oscar”. But like the Zero, the Oscar had some design problems, mostly the lack of self-sealing fuel tanks, armor protection, and light armament. Nevertheless, it did well against the early Allied fighters like the Buffalo, the P-36, the P-39, and Spitfire I. Almost all of the Japanese Army aces got victories in Oscars early in their careers.

This is a Platz/Bego kit. The molding is delicate and outstanding. You get 2 kits in the box, nice extra parts, and decals for 4 Ki-43-1s. There is a nice fuel tank for beneath the fuselage, and bombs with the necessary attachments.

This project took only a little time, compared to some recent projects. Everything fit nicely. I didn’t have to use any putty in the entire project. I painted the interior and the wheel wells using a metallic blue which the Army used for corrosion prevention. The interior is minimal, but includes the seat, control stick and instrument panel. The big delay for the fuselage was waiting for the interior paint to dry. Once the interior was installed, the fuselage halves went together beautifully. I painted the engine and the exhausts, and glued them to the mount. I put the cowling in place, but didn’t glue it in, waiting until paint was complete. I also waited until paint was complete to install the horizontal stabilizers.

I was ready to apply the paint.

The paint job was pretty basic. The entire top of the airplane as well as the horizontal stabilizers was Nakajima Green. I then masked the top and painted the bottom and the stabilizer bottoms light gray-green. This is a great paint scheme… Two colors and you’re done. I did have to paint the landing gear doors underside gray-green and the canopy dark green. There was also some detail painting on the landing gear legs and the wheels, but in this scale, that’s not a big deal.

I put the horizontal stabilizers on at this point, because they are necessary for decal placement.

I applied a coat of Future and continued.

These decals are really the best. But then they’re Cartograf, IMHO the best in the business. I applied the markings on the fuselage sides and tail first because I didn’t want to foul up the other decals when fooling with these more difficult markings. The victory markings and lettering on the tail are all part of that long stripe that goes down the fuselage side. I did the right side first, and everything went pretty well. The left side fought a little. The stripe folded. Twice. But it’s a credit to Cartograf that I was able to get it straightened out. The large hinomarus on the wings went on without any trouble, as well as the tiny ones on the fuselage. I was a little worried about the white stripe that goes around the back of the fuselage. I didn’t need to worry, the stripe went on nicely, first try, and the ends mated up cleanly, with a little overlap, just in case.

I waited a couple of days, then sprayed the whole thing with clear flat to protect the decals and even out the finish.

I assembled the landing gear and got it mounted under the wings. I also put on the bomb racks, but didn’t put the bombs on, because this is a fighter, right? I put the tail wheel in place. It’s tiny but fits nicely. The canopy was next, then the prop, and last was the antenna. I always manage to break off the antenna unless I leave it until last.

And the whole project was finished.

Highly Recommended. The parts are finely molded, and except for where the parts attach to the sprues, there’s not a lot of work involved in getting everything together.

The decals are first rate, and the schemes are interesting. I also need to reveal that I built a similar kit from Platz about 6 months ago for a review. But this one is the military Oscar, the other was from the anime TV series “Magnificent Kotobuki”. This one is just as great as the anime version.

And you get two kits in the box!

Many thanks to Platz for this lovely kit, and thanks to IPMS USA for letting me build it.