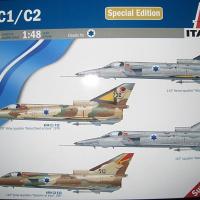 Whenever Italeri announced they were releasing a 1/48 model of the Israeli C1/C2 Kfir, I really got excited. I thought that my prayers had finally been answered for getting a good 1/48 Kfir kit. But then I started thinking. Italeri has been famous over the last few years of rereleasing the old ESCI and other kits with a beautiful box and a great decal sheet.

When I got the box from Dave Morrisette, I was really excited, just because of the box art. There are four beautiful full color profiles of three C-2’s and one C-1, with two of the aircraft being two tone gray and two with the Israeli desert camouflage scheme. But, then I opened the box, and all of my excitement and enthusiasm disappeared. There was the same kit that I had struggled though building in the late 1980’s. There were not even any new sprues. It was the same old ESCI Mirage III kit that was made to look like a Kfir. There was, however a beautiful decal sheet that featured a C2-882 of the 113 Hornet Squadron, 1979 a C2 of the 101 Squadron, a C1 of the109 Valley Squadron at Ramat David Air Base, 1976 and a C2 of the 144 Arava Guardians, from Hatzerim Airbase in 1987. The decal sheet, however, is very typical of Italeri kits. They are printed in a matte finish, including the carrier film. It really makes you wonder if you are going to have difficulty later.

The instruction sheet is an eight page foldout with one page describing the aircraft, one page with ModelMaster paint listings and a photo of the kit sprues, 21/4 pages of vague assembly drawings, and three pages of decal placements.

Construction of the remainder of the kit was frustrating, in that no two parts seemed to fit, there was lots of flash to clean up, and assemblies like tanks, that were supposed to be round, ended up being oval shaped, due to bad fitting halves. The kit molds definitely showed their age on this one.

All of the things that make the Mirage airframe a Kfir are in the kit and there are generally raised outlines to get you in the ball park on placement. All of the panel lines are raised, and I was bound and determined to build this kit without having to re-scribe anything. I pretty much succeeded, thankfully. Some things, like the two cannons require a little imagination to be recognized, however. They are more like blemishes in the plastic that they are cannons. I compared the panel lines with 1/48th scale drawings from IsraCal’s great book on the Kfir, and found that the majority of the panels were wrong or were somewhere near where they were supposed to be. Once again, this is a Mirage in Kfir clothing. This becomes a problem later with the decals, because some of them are supposed to conform to panel lines, or be in close proximity.

The construction drawings are very basic, and leave a lot to your imagination or your reference materials on where things are located. The flaps and ailerons do not fit at all and a lot of trial and error will finally get the wing tanks and centerline tank installed. I never did figure out where and how to install the missiles and missile rails. The placement of all of the elements of the nose gear and main gear are trial and error, and I had to drill the main landing gear legs out and install a brass rod in them, as they are simply a butt join. No strength at all. Prior to painting, I masked off the windscreen and canopy and put them in place with glue, since the canopy was going to be closed. It wasn’t without any excitement, however. The windscreen is too wide and the angle of the rear of the windscreen is wrong, so that requires some trim and fit, trim and fit, etc. The canopy is also too big, but only requires a little bit of trim and fit, trim and fit, etc. I got them where they were as close as I figured I would get them and then progressed on to the painting.

I chose to do the C2, Number 512-144 from 1987. I chose it because it had the camouflage scheme, but didn’t have the large black and yellow triangles that I knew were going to be a big problem. I used Gunze Sanyo acrylics for the paint job, and for the first time in the thirty plus years I have been using acrylics, I had cracking in the finish. I have been using Gunze since it first hit the States, and have never had problems. It only occurred with the FS30219, for some reason, but it did crack. But, I wasn’t going to start over.

The decals look great on the sheet, come off of the backing really well, but then the fun starts. Even though I had about three coats of Future on the model, sometimes the decals would not slide at all from where they were placed, even if you flooded them with water. And trying to get them to lie down was a real lesson in frustration. I used every decal setting and softening solution made by Model Master, Gunze Sanyo, Walthers and Micro Scale, only with moderate success. Nearly every decal had some degree of silvering. So, I resorted to Phillip Martin’s true test of decals; the lacquer thinner test. This is what I had to do in most cases to get the decals to lay down, especially if there was a panel line involved. You have to be really careful, really precise and really desperate to use lacquer thinner on decals, but sometimes that’s the only game in town.

When I got through, I had something that looked like a Kfir that I could put in my case, but not without a lot of effort.

My thanks to IPMS/USA for the chance to review the kit and to MRC-Model Rectifier Corp. for the review sample.

Cockpit and canopy
Previous Next