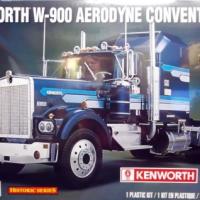 After being developed in the early sixties the W-900 Series truck has proven to be such a value that it is still being produced. Its dependability and value have made it a perennial favorite with owner-operators.

This review covers the Kenworth W-900 Aerodyne Conventional 1:16 Scale Monogram Model Kit #85-2508. This is a larger scale kit with a mammoth footprint. This kit has been released before in other forms but the parts have not really changed over the years. It is appropriately rated a skill level 3 build. Because of the sheer size and having to use some altered build sequences to provide for good finishes I would agree with the rating. There are 278 parts molded in blue, black, chrome and clear and including vinyl tires and waterslide decals with a nice instruction sheet. If you truly want a big rig model – they don’t come much bigger than this! This kit features a detailed turbo-diesel engine, air bag suspension, dual exhaust stacks, air cleaners, hinged front hood, and soft black tires. Finished dimensions are: Length: 20", Width: 6”, Height: 8-3/8".

If you want an impressive model for your display shelf or if you are looking for a contest base this kit is just the ticket. At 1:16 scale the cab is an enormous 20” long. There is plenty of territory to display your detailing talent and customizing is an option that would really make this kit standout. A word of caution though – this kit will take you a little longer to finish just because of the sheer size, but also because this is an older mold design. Many of the tubular shaped parts are molded in two halves and that can require some filling, sanding and sometimes refinishing (as in the case of chromed tanks) to properly build the kit to its full potential. That said; it’s a beautiful kit and the extra time is worth it when you’re finished.

I started this build by priming all the main parts even though it is molded in blue for the body and black undercarriage parts. I think that gives the finish better uniformity with a little better realism. Normally a build starts with the engine but the frame comes first on this one. Construction is clear and straight-forward here. Even the parts for the front suspension are pretty beefy at this scale so the leaf springs and tie rods are easy to assemble and the parts have positive locations tabs. The power steering reservoir and shocks install nicely too. The front brakes are simplified but mostly hidden anyway. The rear air bags and plates also install easily. Adding the fifth wheel and plate finishes up the frame and you have a nice platform for the cab, as it is true and straight.

Putting together the rear axles, hubs and brakes is quick, but you want to finish off the seams where the halves are joined. Letting them dry and sanding off the seams would really improve the look of the finished model, which is the case throughout the build wherever there are two halves that need to be joined. Just pop the axles into place with the driveshafts between them. Add in the torsion bars and shocks and you’re ready to move on to the engine.

The engine is comprised of 21 pieces, and there is some molded-in detail, but overall the engine is ripe for detailing and a coat of CAT Yellow really makes it look like the powerhouse that it is. It goes together with no real issues and with some simple detailing it looks real enough to power your lawn mower. Just nestle it into the frame and simultaneously add the driveshafts. The long one with the mount goes into the transmission.

Assembly of the radiator and access steps is by-the-book. Then there are those chrome fuel tanks. There’s no way to hide the seam after joining the tank halves together so you’ll need to accept it as the price of an older subject mold, or finish off the seams and paint the tanks or re-chrome them. Add the lights to the bumpers and glue those to the frame, then we’re on to the wheels.

All the tires are the same so it doesn’t matter which you use. They do have some lettering on the outside face, however. The front wheels go together without a hitch and you might want to scuff the tread a bit for realism. The chrome wheels are a nice touch and they really add a nice look to the overall model’s persona. The rear wheels are duels but they assemble simply as well.

The interior is pretty simple and could really be enhanced, but it looks pretty nice on its own. There are two high-back bucket seats, a shifter, and some floor pedals. The dash is a fairly decent representation of the real one and includes the requisite CB radio for cavorting with your convoy. There’s no detail or furnishings for the sleeper, but it’s not really visible later anyway.

The air filter mounts, cab, and sleeper body shells all glue together without issue. You can assemble the sleeper roof now, but paint the sleeper and inner fender shields with the cab detached. Add the lower roof panel and vent doors to the roof. Now you can paint all the related cab parts in body color for a consistent finish. Installing the decals was easy, and they went on well without any major contours to contend with. Some setting solution helps them form over the cab’s rivets. I used some foil to make the trim and air filter straps pop. The window glass fit well, followed by the sleeper top.

At this point you install the cab, but there is something that will really make this a better build. If you remove that rear alignment tab and take about .080” off the front tabs you’ll avoid a misfit of the hood to cowl later on by sliding the cab forward that much before gluing it into place. This will also allow the air intake ducts to come into contact with the filter tanks more properly. Adding the rest of the body accessories is all that’s left, and none of them posed any difficulties. Paint the turn signals and roof lights appropriately, and add a little black wash to the grill. That’s pretty much it and there’s some chain and cable left to add to the back of the cab for more realism too.

If you love big rigs this is one “really” big rig. There’s not much flash on any of the parts, and the fit on most of the pieces was excellent. There are some issues with the hood-to-cowl fit, but if you know this ahead of time, it’s easy to fix. The only other item is the joins where two halves are assembled. You’ll find the need to fill and paint or re-chrome to get the best possible look. This model is massive and with some time and attention it will become the centerpiece of any display. It was a clean build, but it takes some time.

I would like to thank Revell for making this kit available again and IPMS for letting me review it.